The Gertrude Stein Mystery or Some Like It Art 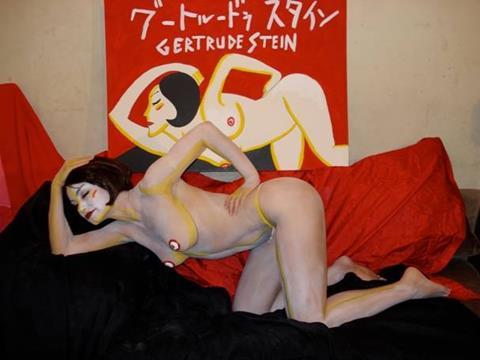 Philippe Mora’s freewheeling mock-doc (or ‘docufiction’ as it is described at one point) is an amusingly watchable home-movie style film that takes as its bizarre premise that writer Gertrude Stein didn’t actually die in 1946, but in fact led a hidden ‘life after life’, contributing to many key cultural events of the 20th century and the inspiration for a series of great artists, filmmakers and writers.

The Gertrude Stein Mystery or Some Like It Art is certainly a bizarre movie, and certainly one only likely to find a home on the festival circuit.

The film, which had its world premiere at the Era New Horizons Film Festival in Wroclaw, Poland, could be a little tighter and less scattershot, but as a piece of diverting intellectual fun this movie labour of love – it took some four years to make – could well find a home at festivals looking for some oddball entertainment to fill a late-night slot.

The film opens with art historian Lord Steinway (Mora himself, affecting a plumy English accent) reporting to camera from Tibet where he is hunting for a special herb that helped keep Stein alive.

Hunting around the world – locations include Madrid, Tibet, London, Cannes, Los Angeles, Mexico, Australia and (for no real apparent reason) Scotland - for clues to the supposed rumours that Stein didn’t actually die in 1946, making startling discoveries along the way.

Apparently not only was she a spy, had an affair with Janis Joplin and was a frequent LSD user, but according to Steinway she also featured in a series of hitherto unseen films made by icons of cinema, including Alfred Hitchcock, George Cukor, Fritz Lang, Alan J Pakula, Bob Fosse, Edward Dmytryk, John Frankenheimer…and Steinway has managed to find the films.

What follows – from about the half-way point of the film – is a series of supposed movie extracts from these films (some amusing, some well staged and some engagingly clumsy), with Mora now playing Gertrude Stein and Jonathan Ball playing her long-time lover Alice B. Toklas.

Plus according to the film’s interview with London-based producer Sandy Lieberson (playing himself), he and Stein were the producing powerhouses behind films such as The Birds, Lolita, Belle de Jour and On The Waterfront. Lieberson, it should be noted, produced Mora’s controversial 1973 documentary Swastika.

The Gertrude Stein Mystery or Some Like It Art is certainly a bizarre movie, and certainly one only likely to find a home on the festival circuit. Philippe Mora – director of films such as Communion and Howlings II and III – is game for a laugh, and is engaging both as an actor and director. The freewheeling nature of the film makes it hard to really engage with, but his interviewees and fellow actors (including a game Rena Riffel, who directed, wrote and starred in the equally strange zero-budget Trasharella) happily go along with the whole surreal shebang…plus the mere fact that he got it made is a miracle in itself.