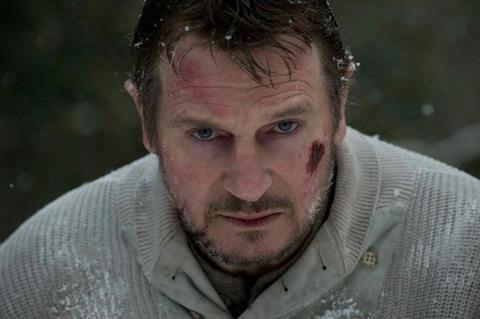 A brutally beautiful survival-horror tale, Joe Carnahan’s The Grey is a classy bit of old-fashioned tough-guy entertainment as a bunch of grizzled guys have to take on a bleakly harsh environment as well as a pack of rather hungry snarling wolves when then their plane crashes. The film lacks the snappy pace to work as an out-and-out horror/thriller, but it is impressively driven by Liam Neeson’s haunted and admirably physical performance.

Liam Neeson offers up a perfect blend of tough authority and gloomy despondency, and his haunted performance is the beating heart of the film.

On paper The Grey comes across as a simplistic genre film – bunch of guys stranded in the snow and stalked by killer wolves – but there is a very arty quality to the film, with Carnahan (who worked with Liam Neeson on The A-Team) dwelling more on the roughneck men and their backstories than on the snarling beasties. In addition the stunning locations – it was shot around Smithers, a small town in British Columbia, Canada – and very real sense that the actors are performing in real freezing conditions and not romping around in front of a green screen adds much to the film.

But opening on January 27 up against the likes of Man On A Ledge, The Descendants and One For The Money (with action flicks Haywire and Underworld: Awakening having opened the week before) it may find it hard to carve out an audience. The languid pacing (the film runs close to two hours) may not work for genre fans, while the blood-and-gore is effective rather than copious.

The film opens with a nicely moody voiceover from Neeson, whose character John Ottway works as a sharpshooter for an oil refinery in Alaska whose job is to keep bears, wolves and other beasties from attacking oil workers during their shifts.

Workers are heading back home on a jet when they hit a brutal storm, causing the plane to crash in the Alaskan tundra. All on board are killed except for eight survivors, who find themselves threatened by a pack of ferocious wolves who object to the bloody and battered men being dumped into their hunting ground. Ottway naturally becomes the tough guy leader, leading the survivors through storms and heavy snow in a desperate bid to find civilisation, with the wolves starting to pick up the men one-by-one.

Liam Neeson offers up a perfect blend of tough authority and gloomy despondency, and his haunted performance is the beating heart of the film. Apparently suicidal at the start of the story, his desire to survive is linked to a backstory about his wife (played by Anne Openshaw, only seen in tantalising flashback scenes) and his recollections of his tough Irish father and the poem that was the mantra for his life – “Once more into the fray. Into the last good fight I’ll ever know. Live and die on this day. Live and die on this day.”

Given the sub-zero conditions and harsh landscape (meaning big coats, hats, gloves and beards) it is hard for the actors to make a strong impact, especially as dialogue is limited to campfire chats in-between wolf attacks. Frank Grillo makes an impact as the only badass who faces up to Ottway, while Dermot Mulroney is impressive as a family man way out of his depth in the bleak and dangerous location.

Joe Carnahan achieves an impressively harsh environment with the bleak locations stunning in their unrelenting harshness. The wolves – a mixture of puppets, CGI and trained animals – are threatening rather than terrifying, with the real horror of the stranded men the mounting realisation that there is little chance of escape or being found. The wolf attacks are short sharp and bloody, with the only real effects misstep coming when the wolves surround the men and can only be seen by their shiny white eyes. Funny rather than scary.

The Grey is beautifully shot by Masanobu Takayanagi, and while the whole Jack London-style storyline may well appeal to discerning audiences, there is a niggling sense that shorter and snappier might help make it more appealing to genre fans.