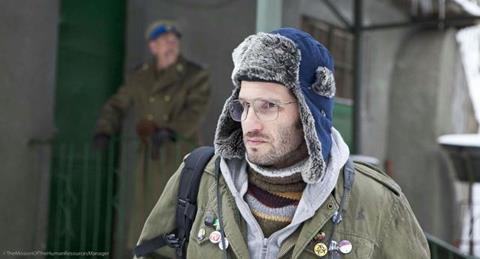 Eran Riklis’ new film should be about a man charged with a mission he dislikes only to become obsessed with it in the course of the proceedings. But Riklis, probably the busiest Israeli filmmaker these days, piles so many more ingredients on his plate here that it is soon evident he is too distracted to pay sufficient attention to any one of them in particular. His name will probably carry the picture through a lot of festivals but critical support risks being very limited in this case.

Visually uneven, possibly because of early print problems, the film nevertheless hits such location highlights as the Golden Dome in Jerusalem, the picturesque Romanian landscape and the smoking ruins of a city slum.

The picture, adapted from a story by celebrated Israeli novelist A. B. Yehoshua, starts in Jerusalem, when the unclaimed body of a woman killed ten days earlier in a suicide bomber’s attack, turns out to be that of a foreign worker in one of the city’s big bakeries. A scandal is about to erupt in the media, which pretends to be scandalized by the fact that the victim’s employers did not take the trouble to identify her. Worried the case might damage the reputation of her business, the Widow (Gila Almagor) who owns the bakery, asks her Human Resources Manager (Mark Iwanir), to pull the chestnuts out of the fire.

A tough guy who looks like a Mossad agent (and might have been one, given the hints about his adventurous past), he is unhappy behind a desk and going through marital troubles. He is dispatched in the company of a sleazy reporter, adequately known as Weasel (Guri Alfi), to take the dead body back to Eastern Europe (most of the film was shot in Romania but the locations are not identified) and arrange for the funeral in the woman’s place of birth. An endeavor more complicated than it seems at first sight, given the misery left behind by the Communist regime, the corruption, the poverty, the winter storms in the mountains and the language barrier, all of them contributing to turn the journey into a literal saga, much longer than originally planned.

Trying to keep it all on a metaphorical level, only the dead woman has a name, the rest of the characters are known by their functions, the script attempts to deal or at least mention at one and the same time, at least half a dozen weighty matters. There’s human interest in putting a face on the anonymous victim, the political angle is introduced by using, as the cause of death, a terrorist attack in Jerusalem, the social dilemma emerges when it is revealed the dead person was a foreign worker, and the evil media is exposed when a tabloid threaten to turn it all into a major scandal.

But Noah Stollman’s script fails to integrate all of this under one roof, leaving vast narrative gaps unexplained and spreading quite a few unnecessary melodramatic twists on the way. The premise triggering the entire plot, which suggests that any kind of business would worry of being exposed because one of its workers was killed in a violent accident outside his place of work, is pretty farfetched. Having a Christian woman, who hangs a cross on her wall, living in the most secluded Jewish Orthodox area in Jerusalem is preposterous, just like the claim that her family had requested her body to be returned home when evidently no one can be bothered with it there. And these are only a few of the incongruities creeping up through the film.

Once the convoy consisting of the Human Resources Manager, the Weasel, the late woman’s divorced husband (Bogdan Stanoevitch) and her rebellious son (Silver) set out on their way to the far-off funeral, the events become increasingly surreal, but Riklis’ insistently realistic direction will not allow allegory to replace facts. And at ground level, these facts don’t make much sense. Visually uneven, possibly because of early print problems, the film nevertheless hits such location highlights as the Golden Dome in Jerusalem, the picturesque Romanian landscape or the smoking ruins of a city slum. Blessed with a distinct photogenic presence, Mark Iwanir’s assured performance is one of the best things in the film, pity his role is not better founded in the script. Rozina Cambos offers a refreshing parody of an Israeli minor diplomat abroad, but the atrocious accent of Noah Silver, grossly overacting as a troublesome teenager, will make Romanian audiences jump out of their skin.

The Human Resources Manager screened in the Piazza Grande section of the Locarno International Film Festival.