The IMAX difference for The Dark Knight Rises

Screen enjoyed hearing about the merits of true IMAX from The Dark Knight Rises VFX supervisor Paul Franklin before a screening at London’s Science Museum. 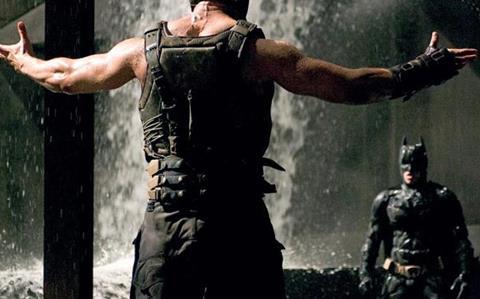 Friday marked the opening night of one of the cinematic events of the year - Christopher Nolan’s final entry in his ultra-successful Batman trilogy, The Dark Knight Rises. I sat down for a ‘real’ IMAX screening at the London Science Museum, preceded by a talk from the film’s VFX supervisor Paul Franklin.

Nolan has long been a supporter of film produced on film, as opposed to digital, and in particular he is an advocate of IMAX cinema. Mentioning the term ‘IMAX’ conjures thoughts of gigantic, futuristic screens that display breath-taking imagery. This would only be a partially true imagining; as Franklin explained, it has actually existed as a film format since 1969, but they’re now refining and improving it, attempting to make it the most viable method of producing cinema that it can be. However, IMAX is indeed huge; Franklin noted the comparison to, say, HD TV is almost redundant, and even 35mm film pales in the wake of the IMAX behemoth.

Typical 35mm film can have an apparent resolution of about 4,000 lines. IMAX clocks in at a staggering 18,000 lines. The reason for this difference is relatively straightforward; IMAX uses 70mm film, and it uses it sideways. They achieve the optimum image by running the film through the gate horizontally, using the full width of the 70mm negative as the full height of the picture. The film ends up being 15 perforations wide; hence why ‘true’ IMAX (which I will get to in a minute) is often referred to as ‘15/70’. Because of this horizontal method of inputting the film, IMAX translates to being roughly 10-times larger than 35mm film stock, and still vastly larger than 70mm displayed in the standard fashion.

One key issue with IMAX cinema, appropriately highlighted in the context of the Science Museum, is that there are variations on the format and they can be drastically different, even though they are all marketed under the same label. To put it in its most basic distinction, IMAX and IMAX Digital is categorically not the same thing. Seeing as most cinemas are making the transition to digital projection, the creators of IMAX had little choice but to launch a digital version of their product, and did so in 2008.

This new incarnation has garnered numerous monikers since its creation, including the rather ingenious ‘lieMAX’. This is because, despite the fact that both variants are sold as IMAX, the digital version is substantially smaller – an IMAX screen is 76x97 feet, while a digital IMAX screen is 28x58 feet. As you can tell by those numbers, the IMAX aspect ratio is also lost when watching the digital version.

Admittedly, there are only five ‘true’ IMAX screens in the UK to choose from: the aforementioned London-based Science Museum and BFI IMAX, as well as the National Media Museum IMAX in Bradford, Glasgow Science Centre IMAX Cinema and the Odeon Manchester IMAX. Their digital counterparts are more widespread, but ultimately you’re paying a similar price for a reduced experience.

I should note at this point that the entirety of The Dark Knight Rises is not in IMAX, but 72 minutes of it is, in comparison with the 28 minutes of original IMAX footage that was in the previous franchise instalment, The Dark Knight. However, you will still be missing out during the non-IMAX segments of the film if you see it in digital – the screen size is still substantially larger when showing only the ‘scope’ image.

Thankfully, if you do get to witness Nolan’s film in ‘true’ IMAX, the effect is rather startling.

However, IMAX is an impractical film format to shoot on, certainly when compared to digital. As Franklin jokingly bemoaned, an IMAX magazine – in this case on an MSN IMAX camera, of which there are only eight in the world - will only hold about 1000 feet of film, enough to shoot two minutes of footage. This means that if you’re shooting from the front of a helicopter, you have to land every two minutes to refuel your camera. It may be a struggle, but filmmaking is ultimately a labour of love.

The segments like the ones filmed from a helicopter are amongst the most impressive in the film, achieved by working closely with the IMAX corporation, making the lenses work faster so they could shoot in lower lighting conditions and making the camera bodies lighter so they could fit them onto new types of rigging. After all this, the end product is a combination of ingenuity, genius, blood, sweat and most probably tears, but it’s also hugely impressive.

In the words of Paul Franklin, “Why use IMAX? Because it’s the biggest, brightest, sharpest film format there is.” Simple enough.

(The Dark Knight Rises screens at the Science Museum for one month.)