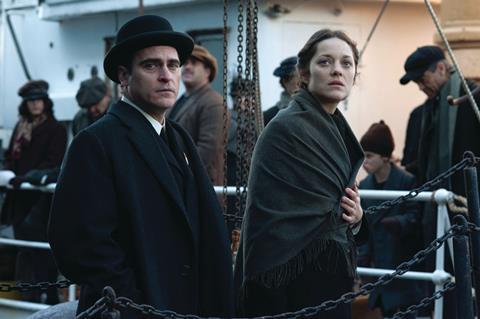 Scratch the good-looking, emotionally charged surface of James Gray’s period take on the love triangle theme he has already explored in Two Lovers and you find a rather stagey melodrama with religious overtones. Set in early 1920s New York, this story of a Polish immigrant who is dragged into a demi-monde of prostitution and burlesque shows by a pimp with a heart of gold moves along briskly enough; but in dramatic terms, we’re on the outside looking in, admiring Marion Cotillard’s full-on performance as Ewa, an innocent besmirched, while never really being engaged by a story so old-school that we half expect to see it narrated via intertitles.

Though Gray offers a well-crafted package, especially on the visual front, there’s surprisingly little contemporary resonance in this immigration melodrama, which is not so much a homeland security tale from the 1920s as a cinematic opera.

The result is a prestige package that will play to older demographics than Gray’s previous oeuvre, though the burlesque-show theme may rope in a few younger fans of that newly fashionable genre. There’s little to fault in terms of production design and costumes.

Chris Spelman’s fine orchestral soundtrack has something of the spiritual lift of James Horner’s score for Malick’s The New World, and cinematographer Darius Khondji lends the film’s shabby variety theatres, boarding houses and Ellis Island holding pens an airless, sodium-lit look that works well in a tale that is about an immigrant in limbo, her legal status unresolved, her heart torn between two men.

In Emanuele Crialese’s The Golden Door, New York’s historic Ellis Island immigrant-processing centre comes as a rite of passage at the end of the film; here, it’s a test at the beginning, and conflict-fleeing Polish arrivals Ewa (Cotillard) and her sister Magda (Sarafyan) fall at the first hurdle, the former rejected because an incident during the crossing has suggested that she is a woman of loose morals – a charge she tearfully denies – the latter because she is discovered to have TB and consigned to quarantine.

But pretty Ewa has been noticed by a well-dressed gent, Bruno (Phoenix), who has the ear of the immigration officials, and she is soon sprung out of the returnee queue and into Bruno’s shabby Lower East Side world.

Bruno is a principled pimp, a sort of remixed Fagin, who uses girls like Ewa, fished out of Ellis Island limbo, to service customers and parade semi-naked in grubby burlesque-show pageants in a theatre run by he motherly Rosie (Solovey). Bruno’s obvious fascination with Ewa doesn’t prevent him talking her into prostitution, to make money for her sister’s medical bills, when her NY-based uncle and aunt cast her off for being a Jezebel.

Her only consolation is Orlando (Renner), Bruno’s magician cousin, who plays the rootless, mischievous romantic foil to Bruno’s jealous, conflicted tragic anti-hero. The stage is set for an operatic showdown – and Gray obligingly delivers.

Cotillard keeps the volume set at 11 with her strongly-accented performance as an innocent striving to retain her purity, a variety-show Mimi out of La Boheme. There’s no faulting her immersion in the character, but the effect is to make Phoenix’s more internalised take on the brooding Bruno fall flat.  And though Gray offers a well-crafted package, especially on the visual front, there’s surprisingly little contemporary resonance in this immigration melodrama, which is not so much a homeland security tale from the 1920s as a cinematic opera: pretty as its central character, but in end, fatally dull.