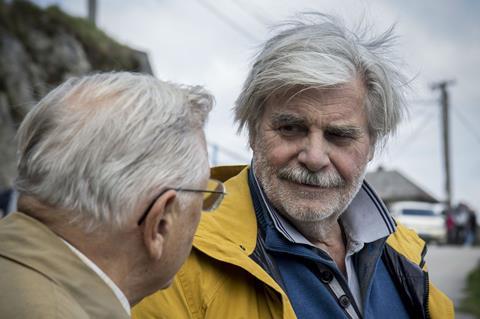 A contemporary road movie involving two elderly men – one the son of an SS officer, the other the son of murdered Jews – suggests a world of dramatic possibility that is barely realised in this disappointing outing by Slovak director Martin Šulík, screening in Berlinale Special. Despite the teaming of Peter Simonischek and Jiří Menzel as the unlikely travelling companions, this follow up to the director’s 2011 drama Gypsy disappoints.

The film resolutely fails to get into gear

A man travels to Vienna, knocks on an apartment door and asks for someone by his Nazi officer’s rank – while holding a gun. We’ve seen this dynamic before, in Atom Egoyan’s 2015 drama Remember. But the comparison is fleeting. When Georg Graubner (Simonischek) opens the door, introduces himself as the Nazi’s son and reports that his father is dead, Ali Ungár (Menzel) pockets the pistol and the film moves on to something far less powerful and thought-provoking than Egoyan’s film.

An 80-year-old retired interpreter, Ali declares that Grauber Snr was the man who killed his parents in Slovakia during the war. “My father had hundreds of people shot,” replies Georg insensitively. Needless to say, they don’t get off on the right foot, Ali returns to Bratislava unavenged, and that should be that.

But it’s now the Austrian who comes calling. Georg has decided to visit the locations in Slovakia that his father had once written about. He invites Ali to accompany him, as paid interpreter, and as additional incentive he will share his father’s private letters. Ali may learn where his parents are buried; Georg may finally face up to his father’s nefarious past. And so they take to the road for the Slovakian countryside. It’s going to be a long journey. Ali, a widower, couldn’t be stiffer if he tried; Georg is a language teacher with a drink problem, who has three marriages behind him and remains an incorrigible flirt, though no spring chicken himself.

The first leg of their journey is almost entirely comic, fuelled by Georg’s desire to enjoy himself (much to the chagrin of his companion) and involving young masseuses, synchronised swimmers and an attempt to seduce a thirty-something at a wedding party. There’s method to Šulík’s madness (nay, perceived bad taste), since Georg’s joie de vivre is founded in part on avoidance; one of the film’s most telling scenes will involve the Austrian relating how his younger sister allowed “disappointment and anger” to kill her, a fate he refuses to accept for himself.

Eventually, the journey gets down to business, as first they come across filmed testimony of the murder of children and mass graves, then encounter rural locals who have no desire to dredge up their own community’s collusion in the killing of Jews.

But, all the while, the film resolutely fails to get into gear. There’s little chemistry between Menzel’s low-wattage performance and Simonischek’s rambunctious one, nor is there much development in their characters’ relationship, beyond the slightest rapprochement. Georg’s story has one twist, right at the end, though it’s something that would be more in keeping with Egoyan’s approach than Šulík’s. The latter’s direction is rather stolid, and weighed down further by a soundtrack that can’t decide if it wants to be jaunty or funereal – much like the film itself.