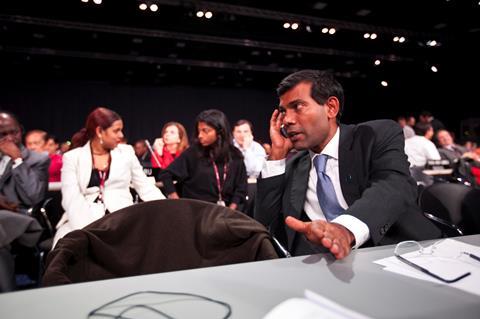 A country is threatened with disappearance as the level of the Indian Ocean rises, with no sign of receding. If the charismatic leader of this island land can’t stop the waters, at least he can take a warning to the rest of the world. This isn’t a disaster epic, it’s the Maldives today.

The Island President brings you an urgent take on trouble in paradise, and a character, Mohamed Nasheed, who couldn’t be a better advocate for an underdog’s position. More entertaining and less didactic than An Inconvenient Truth, the film should ride the zeitgeist to a theatrical release in North America and Europe, and a strong showing in television markets. Mohamed Nasheed won an election. He should help The Island President win awards.

The documentary by Jon Shenk (2003’s The Lost Boys of Sudan) begins with the radiant beauty of the Indian Ocean, and the allure of a land of blissful serenity. Prying into that myth, the film traces the trajectory of Nasheed’s career in a tourist Mecca where locals were ruled by a brutal dictator. A dissident, Nasheed survived prison (where friends died) and joined a movement that prefigured the more recent Arab Spring. Archival footage documents torture and worse. As president, he inherited a newly freed democracy and the risk of losing it all to climate change.

The Island President makes visual richness out of its story’s contradictions. The azure sea that draws sun-seekers from Europe also surrounds horrific island prisons from which escape was impossible. Opponents of the regime that operated with impunity until 2008 were arrested and isolated. Many were driven abroad.

Between meditations on the islands, the camera races through the recent history of the Maldives, as Nasheed, charged with terrorism and a range of other crimes, eventually wins election as president in 2008, but not before the government declares war on its opponents. Had the tsunami of 2004 not destroyed much of the Maldives and ravaged its economy (weakening the authoritarian regime), his message of reform would have been far less urgent.

Nasheed is a prodigious and witty orator (in contrast to the wooden Al Gore) with a modern activist’s instincts for the camera. Once president, in his campaign to make the Maldives carbon-neutral, he organised a now-legendary cabinet meeting underwater in 2009. Praise came from around the world for the brave new leader of the tiny threatened country.

The circumstances that the Maldives face internationally ensure that The Island President is neither an infomercial nor a hagiographic campaign doc. As the waters rise, Nasheed and his delegation appeal for their nation’s survival to the world community in international meetings that couldn’t be less cinematic. Shenk follows Nasheed through a faceless labyrinth of hotels and conference halls - a vivid metaphor for the frustrations of a tiny country confronting major powers.

Closed doors contrast with the openness that Nasheed fought to bring to his own government. “If you thought defending Poland or defending Vietnam was important,” he pleads to his colleagues, “defending the Maldives is important.”

Charisma takes Nasheed and the Maldives only so far. Victories at these conferences are compromises (with the growing economies of India and China declining to make sacrifices), but Nasheed is preparing for his next battle, not content to be smiling mascot for a lost cause.

The Island President mixes grim archival imagery with on-the-run footage. Production values are high, even when the filmmaker is chasing his subject. The result is an inspiring portrait, in a sea of troubling environmental threats.