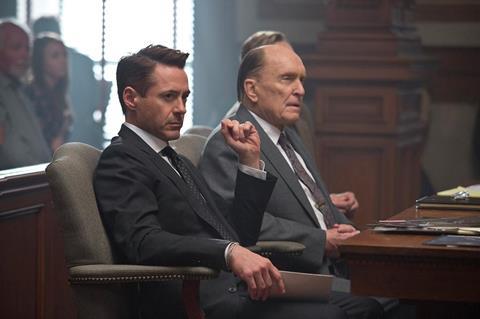 A nicely intense family drama with a dash of courtroom action thrown in for good measure, Toronto Film Festival opener The Judge is given gravitas and emotional heft by suitably driven performances by Robert Downey Jr. and Robert Duvall, but while moving and thoughtful in places it never really finds the right balance between the two genres, feeling times like it is based on a John Grisham book that he put to one side while trying to come up with a twist or sub-plot to give it a real dramatic edge.

Running well over two hours, director David Dobkin isn’t afraid to add plenty of sub-plots and incidental characters to the plot, rather like extraneous strands to a novel that might have been shed to make it more streamlined.

Where the film does fare best is when it comes to the conflict between Robert Downey Jr. and Robert Duvall’s characters, an estranged father and son brilliant at locking horns but terrible at expressing their true emotions. It takes a dramatic incident to grudgingly bring them together and find away to put away years of unspoken animosity and realise that blood is thicker than water. Set for an October theatrical release, much will depend on Warners’ marketing muscle and whether Duvall and Downey Jr., go that extra promotional mile to help secure coverage and support for possible awards nominations.

Post Iron Man, The Avengers and Sherlock Holmes, Robert Downey Jr. has the creative muscle to help get productions made (he is a executive producer on the film) and he brings his usual left-field charm to the role of a slick and sarcastic big city lawyer who reluctantly returns to his childhood home town after the death of his mother. This puts him into immediate conflict his father – known to all simply as ‘The Judge’ – a man who has overseen justice in the community for years as the town judge. Seeing Downey Jr. and Duvall perform together is the film’s great pleasure, and while neither tries to outdo each other certainly their roles bring out the best in them.

As the film opens, Hank Palmer (Downey Jr.) is an arrogant lawyer who specialises in getting wealthy-but-guilty clients off, but who is less than good at wrangling his personal life. About the separate from his wife Lisa (an underused Sarah Lancaster) he says a fond farewell to daughter Lauren (Emma Tremblay) and heads back to his middle-America home town for his mother’s funeral. Meeting up with older brother Glen (Vincent D’Onofrio) and slightly mentally disabled younger brother Dale (Jeremy Strong), he goes through motions of trying to reconnect to straight-laced father, but it seems their relationship is too fractured to be mended.

After a side sub-plot trip to the local diner where he meets old high school flame Samantha (Vera Farmiga, playing things blousy but smart), he about to fly back home when he gets a call from his brother. It seem the Judge took his car out late one night to do some shopping and struck and killed someone. And that someone happened to be someone he had jailed a killing many years earlier, and recently released, with the local police as suggesting that the Judge may have deliberately run the man down.

The scene is rather predictably set for Hank to take on the ‘father’ role and use his legal eagle skills to defend the Judge, finding himself up against out-of-town top prosecutor Dwight Dickham (Billy Bob Thornton) as tries to discredit some pretty damning evidence. As the case draws on, it will come to no surprise to any viewer that father and son slowly and often painfully draw closer and even manage to unearth some of the issues of their past.

Running well over two hours, director David Dobkin (who made Wedding Crashers) isn’t afraid to add plenty of sub-plots and incidental characters to the plot, rather like extraneous strands to a novel that might have been shed to make it more streamlined. As well as father-son battles, we also have Hank and old flame (and his near-miss with her beautiful adult daughter, played by Leighton Meester); Dale’s disability quirks and homespun compassion; an incident in the past between Dale and Glen; the Judge’s secret illness; the victim’s bitter mother (a nicely steely Grace Zabriskie) determined to make money from the case; Hank’s daughter bonding with her grumpy grandfather, and Billy Bob Thornton’s rather thinly drawn lawyer.

There is a rather half-hearted attempts to put some twists into the courtroom deliberations (and a couple of rather theatrical ‘oooooohs’ from the onlookers), but in truth the best bits of the film are when Downey Jr. and Duvall share screen time together, especially in moving and very open scene as the Judge soils himself while trying to get to the bathroom with Hank having to clean and shower his own father. It is a scene that cleverly moves from sad drama to gentle humour and is the compassionate core of a film that can’t quite decide if its focus should be family conflict or court room shenanigans and ends but being a lengthy but rather lightweight combination of the two.