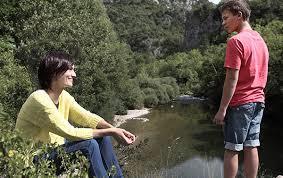 Unassuming and yet ambitious, Alix Delaporte’s second feature film, The Last Hammer Blow (Le dernier coup de marteau), observes a 14 year-old boy as he gets to discover his estranged father, the music of Mahler, the charms of an early love, the temptations of a career in sports, but - above and beyond all - faces his mother’s declining state of health, desperate enough for her to accept defeat in her struggle with cancer. This apparently modest, gentle, coming-of-age story manages to incorporate all of these and some more, without raising its voice or resorting to the tear-jerking methods often used in such circumstances.

Delaporte’s direction draws out some remarkable performances, particularly from Romain Paul, stubborn, confused, frustrated and trying to cope with more than a 14 year-old is equipped for.

Victor (Romain Paul) lives in a caravan on the outskirts of Montpellier with his mother Nadia (Clotilde Hesme), a waitress too weak to keep her job because of the painful treatment she goes through. She wears a wig to hide the loss of her hair and though she never says that much, she is gradually trying to put her affairs in order and ascertain her son’s future, as she feels she hasn’t got much time left. For this reason she hopes he might have a shot at becoming a professional football player, but at the same time she also encourages him to see his biological father, orchestra conductor Samuel Rovinski (Gregory Gadebois), in town to conduct Mahler’s sixth symphony at the city’s opera house.

A temperamental artist who hates to be distracted by anything in his work, the father first tries to dismiss the boy, saying he has never had any children. Then he gradually accepts him, takes him to his heart and initiates him into Mahler’s music, establishing a bond that had seemed improbable to begin with. At the same time, his football trainer (Farid Bendali) wants Victor to show his worth in front of the talent hunters of a professional team while the daughter of the Spanish couple living next door, a girl his own age, shows a kind of interest in him. But he is mainly concerned with his mother’s condition, alternately angry at her for being sick and giving up on her treatment, terrified that she might not be by his side much longer and ultimately, completely devoted to her.

Delaporte conveys all this with a surprising economy of dialogue, with the characters seemingly loath to open up and share feelings. They keep everything bottled up inside, using every excuse, not to mention lies, to avoid the literal truth. This turns out to be particularly significant in the relationship between Nadia and Victor - she is trying to soften the blow of what she believes to be her impending departure from this world, he angrily rebelling against all these veiled reminders of a future he refuses to assume, but neither one of them ever mentioning, even once, the word “death” or anything directly related to it.

While the story telling itself is not that smooth, particularly in its early stages, Delaporte’s direction draws out some remarkable performances, particularly from Romain Paul, stubborn, confused, frustrated and trying to cope with more than a 14 year-old is equipped for. Gregory Gadebois and Clotilde Hesme, who were both in Delaporte’s debut (Angel And Tony) offer solid performances, each in his own way, with Hesme’s emaciated figure often striking poses of silent, desolated despair.