The Little One (La Pivellina) 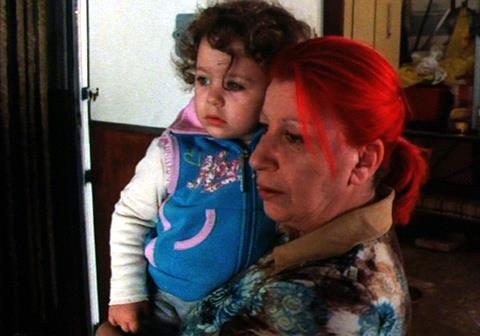 A remarkable first foray into narrative filmmaking from an Italo-Austrian documentary duo, La Pivellina sets an affecting and naturalistic foundling story against the backdrop of an extended family of Rome-based circus folk.

Its grainy handheld aesthetic, Dogme-like use of available lighting and background sound, and a relatively flatline dramatic structure might suggest a festival career for this title – but there’s something so touching and human about the story and the performances that specialist theatrical action should not be ruled out.

We first see anxious middle-aged Patti (Gerardi), with her day-glo red hair, wandering around the scrappy streets and parks of an outer suburb of Rome looking in vain for her dog Hercules. What she does find is a two-year-old girl sitting abandoned on a swing, who says that her name is ‘Aia’ – or Asia. As there is no sign of her parents, Patti decides to take ‘la pivellina’ (the little squirt) home with her, to the trailer she lives in with her German companion Walter (Saabel).

It gradually emerges that Walter and Patti are circus performers; they live near another circus family whose teenage son, Tairo (Caroli), befriends the little girl and becomes inseparable from her. Walter is unhappy with the arrangement – he believes Patti should have taken Asia straight to the police – but he can’t quite bring himself to send the cute little tot away.

That’s pretty much it for the plot. Though the unsustainability of this de facto adoption lends a certain dramatic tension, what really keeps us watching is another sort of tension related to questions about who’s acting and how much of this is real. Because apart from one rather wooden exchange near the beginning, these non-professional actors (all from the travelling circus milieu they inhabit in the film) give performances of astonishing authenticity. And Asia herself is a delight: bright, cute, a little stubborn, and (perhaps a little worryingly) determined to stay with Patti rather than go home to mamma. As might be expected, some of the most graceful sequences are those that have little to do with the plot and appear entirely improvised – including a scene where Walter teaches Tairo to box (it helps that the very likeable Caroli is clearly a born actor).

Crews don’t come much more pared-back than this: the two directors managed the camera and sound themselves, with DoP Frimmel keeping up close to characters (who must have been used to his presence; even little Asia only glances at the camera once). The settings are far from the Rome of the tourist brochures: grimy makeshift encampments behind corrugated iron walls, unauthorised allotments under viaducts and anonymous high-rise condominiums. In fits and starts we also get a sense of the rigours of life for circus folk: work is scarce, people are suspicious, and even getting connected to the electric grid is a major headache.