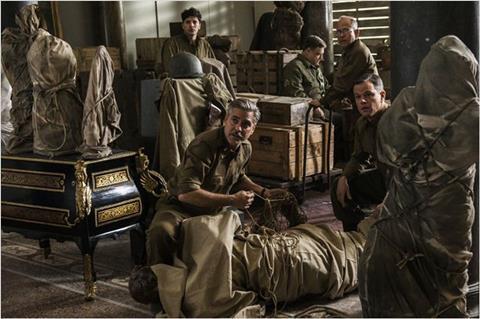 The Monuments Men tries to mix humour and drama, Dirty Dozen-style heroics and Ocean’s Eleven­-esque charm, failing to ever properly land on one consistent tone or direction. Based on the true story of the unsung men who near the end of World War II rescued millions of European artworks and artefacts from destruction at the hands of the Nazis, the latest film from director-star George Clooney boasts a fine cast and impeccable tech credits — which only makes The Monuments Men feel all the more like a lost opportunity as it curiously, stubbornly refuses to come to life.

The Monuments Men shows Clooney continuing to push himself as a director.

Opening February 7 in the US, this Sony release - which also screens at the Berlin Film Festival - will position itself as the grown-ups’ alternative in a marketplace that will soon be filled with animated fare (The Lego Movie) and action remakes (RoboCop). Co-starring Matt Damon, Bill Murray, John Goodman and Cate Blanchett, The Monuments Men has significant marquee appeal, but respectful, tepid reviews may not inspire audiences to seek this out in theatres. Word of mouth will be crucial in determining what kind of legs this possible slow-starter will have.

Set over the span of about three years as the Nazis’ defeat begins to seem inevitable, The Monuments Men introduces us to the titular ragtag team of mostly Americans whose mission was to enter Europe and track down priceless paintings, sculptures and other works that were being held by Hitler. Led by Frank Stokes (Clooney), an art historian, the group also includes other non-soldiers, such as James Granger (Damon), an art expert, Richard Campbell (Murray), an architect, and Walter Garfield (Goodman), a sculptor. While others are engaged in combat, the Monuments Men investigate leads to retrieve these stolen artworks.

For his fifth movie as a director, Clooney continues his tradition of making films in very specific genres. If Leatherheads was his throwback screwball comedy and The Ides Of March his political thriller, The Monuments Men is meant to be an old-school war movie in the tradition of The Guns Of Navarone or The Dirty Dozen.

But the central problem with The Monuments Men is that rather than offering the hearty pleasures of that brand of war movie, Clooney is both too cute and too ambitious in his execution, delivering a somewhat self-satisfied portrait of these unlikely heroes that also aspires to give us a new perspective on World War II, admittedly one of the most filmed events of the 20th century.

Clooney’s film features a measured pace and a somewhat contemplative atmosphere, giving each of the characters substantial screen time as they go about their different missions. But the movie’s offhand observations about the lunacy of war and the value of art fail to cut very deeply. Likewise, none of the characters leave much of an impression.

Murray’s deadpan melancholy is mostly wasted as the bland Campbell - this is even more egregious considering that he’s paired with the equally dependable (and underused) Bob Balaban - while Damon’s interactions with a French curator (Blanchett) who knows the whereabouts of many stolen artworks amount to an ineffectual thwarted-love story. Even Clooney’s Stokes, ostensibly the leader of this team, feels poorly drawn. These characters aren’t assertive or compelling enough for their one-dimensional personalities to seem heroic or engaging, no matter the easy warmth the actors bring to the roles.

Thankfully, Clooney has surrounded himself with a stellar crew, including cinematographer Phedon Papamichael, production designer Jim Bissell and composer Alexandre Desplat, who team up to give The Monuments Men a gorgeous, faintly nostalgic look and sound.

It could be argued that Clooney has opted for a somewhat traditional aesthetic for his movie so that its lessons about art’s lasting impact will be more accessible. (And the contrast between the familiar war-movie tone and these aging, out-of-shape characters could potentially be humorous.) But while The Monuments Men has all the tech details correct - for example, Desplat’s score expertly recycles the genre’s soaring melodrama - it’s lacking in soul or insight. Clooney’s movie has a message, but it’s strangely impersonal.

Even worse, it’s also a bit glib. Based on the book by Robert M. Edsel with Bret Witter, The Monuments Men informs us that these men rescued around five million works, including masterpieces from the likes of Michaelangelo, Vermeer and Rembrandt — and yet the film does a poor job illustrating the importance of that achievement.

For as catastrophic as the loss would have been if these works had been destroyed, The Monuments Men never quite makes the case that the loss of life associated with retrieving these artefacts was worth the sacrifice. Especially considering that the movie acknowledges the horror of the Holocaust, the fate of some paintings and sculptures can’t help but feel secondary to Hitler’s other atrocities. Clooney wrestles with this dilemma poignantly a few times near the end of the film, but those moments don’t feel sufficient.

Generally speaking, Clooney’s dramas (The Ides Of March and Good Night, And Good Luck) have been more confident than his comedies, and that tendency persists with The Monuments Men, where his smirky, just-hanging-out-with-the-guys approach gets tiresome. No doubt the advertising, which plays up the heist-movie tone of the material and the Ocean’s Eleven-style assemblage of recognisable names, will lead some to expect a rollicking adventure, but when Clooney goes for laughs there’s a leadenness that drags the scenes down.

At the same time, The Monuments Men is his least structured film, allowing for an intriguing narrative looseness that gives the film a refreshing unpredictability.

Rather than preparing for one big heist or a final showdown with the Nazis, Stokes and his men chase leads and confront the realities of war in unexpected ways — these characters are in an odd position, both part of the fighting and yet also outside of it. There are ideas at play in this movie, and Clooney labours to make sure they’re all holding our attention.

At its best, The Monuments Men shows Clooney continuing to push himself as a director. At worst, the film suggests what can happen when his reach exceeds his grasp.

Screenplay: George Clooney & Grant Heslov, based on the book by Robert M. Edsel with Bret Witter