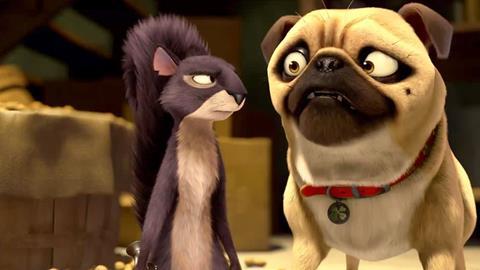 Representing the latest attempt by international players to emulate the success of the major US animation studios, The Nut Job is a well crafted if slightly generic 3D CG outing from Canada/South Korea with Toy Story 2 animator Peter Lepeniotis directing and co-writing. Making big at the box office won’t be easy without the help of a studio brand name, but this likeable furry animal tale should at least be able to set itself up for profitable runs in post-theatrical markets.

There are plenty of fairly amusing characters on offer and lots of undemanding incidental comedy that should work for kids if not adults.

Open Road and Endgame are giving the toon comedy adventure a wide theatrical launch in the US on January 17 and may be able to make a mark before the start (with Warner’s February opener The Lego Movie) of a run of studio animated releases. Independent distributors in other territories should be able to boost the film’s potential by recruiting locally popular voice over performers.

Inspired by Lepeniotis’s award winning 2005 short Surly Squirrel and written by the director and Lorne Cameron (whose previous credits include Brother Bear and Over the Hedge), The Nut Job is set in a 1950s American town. Preparing for the upcoming winter, roguish squirrel Surly (voiced by Arrested Development’s Will Arnett) and his mute rat friend Buddy are planning to rob a nut shop, but the heist gets complicated by the involvement of the local park’s animal inhabitants, led by the intimidating Racoon (Liam Neeson).

The narrative complications sometimes make the film feel too busy, with not enough time for effective comedy or real emotion. But there are plenty of fairly amusing characters on offer and lots of undemanding incidental comedy that should work for kids if not adults. The standout voice performance comes from Saturday Night Live’s Maya Randolph as the gangsters’ loopy pug dog.

The animation (done by Canada’s ToonBox, which previously made Lepeniotis’ Korean feature Bolts & Blip) is a notch or two above the work usually seen in independent features and helps give the film a nice autumnal feel.