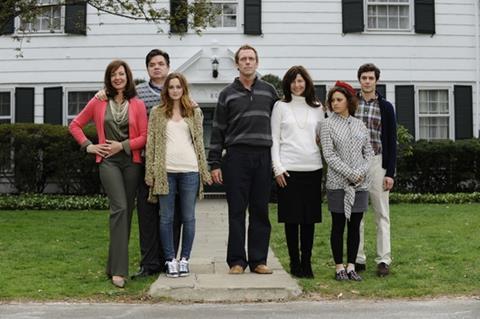 The clichés of American independent cinema are all too apparent in The Oranges, the debut feature film from British director Julian Farino: The voiceover narration of a disgruntled young person. Check. A holiday setting. Check. Catherine Keener and Oliver Platt as parents with eccentric habits (she’s obsessed with Christmas; he loves gadgets). Check. A dysfunctional family sent in disarray. Check.

All the actors do a fine job, particularly Janney as the overprotective mother.

In the case of The Oranges, it’s actually two families who are on the edge, the Wallings and the Ostroffs, best of friends who live across the street from each other in a New Jersey suburb. When the beautiful prodigal daughter Nina Ostroff (Leighton Meester) returns, only to begin an affair with her father’s best friend, David Walling (Hugh Laurie), all hell — predictably — breaks loose.

After one false start, that pivotal May-December romance becomes more involved, and Nina and David decide to make a legitimate go of it. David’s wife, Paige (Keener), moves out, and inexplicably, their post-collegiate daughter, Vanessa (Alia Shawkat), sticks around at home, while Nina’s parents Terry and Carol (Platt, and Allison Janney) watch in horror through their windows the romance developing between these two people born in very different decades.

One of the problems of the story is that this instigating love affair is never fully explained. Why does Nina love David? And besides the fact that she’s pretty, what does David see in Nina? Besides someone to run along the beach with, do these two really have any reason for being together? And is David so blinded by his love for Nina that he doesn’t sit down with his daughter, with whom he’s still living, and have a serious discussion about what’s going on?

More problematic is that Nina and David’s relationship is never fully addressed by the filmmakers. There are some jokes about the characters’ different ages — and Janney delivers a real whopper about maturing male organs — but rarely does the script confront the psychologically knotty nature of such a relationship. In fact, scriptwriters Ian Helfer and Jay Reiss would have us believe that Nina and David’s “pursuit of happiness” actually instigates positive change for all the family members. That may be what makes The Oranges original, but it’s also slightly unpalatable.

All the actors do a fine job, particularly Janney as the overprotective mother who first discovers her daughter’s affair and has the best laugh lines. But all of the characters are drawn a little too thin to make for the kind of strong drama the film aspires to be.

From a visual perspective, there is little that is distinctive about the movie, which may come from Farino’s background in television — he’s directed episodes of Sex and the City, Big Love and The Office. Like those projects, The Oranges should be a fine item for ancillary outlets, but it’s hard to see the film grow much beyond small-screen viewing.