The Other Family (La otra familia) 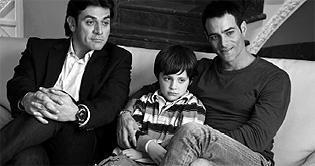 Loza’s To the Other Side made the festival and arthouse rounds in 2005. It was comprised of three different stories about poor kids ages 9-11 from different parts of the world whose fathers had left them in order to seek employment abroad. With The Other Family, he both adds and inverts: Four tales revolve around the appropriate relationship between parents and children, but almost totally in upper-middle and lower-upper class milieus, all in Mexico City.

No matter the film’s contemporary topicality, Nailea Norvind is the principal reason to watch it.

Commencing with a gay male wedding, possibly inspired by the recent legalisation of gay marriage in the nation’s capitol, the film rarely strays from the privileged, rather dull, characters, most of whom want a piece of a cute seven-year-old boy whose crack-addicted mother is barely able to handle herself, much less her beloved but neglected child. Most of the time that Loza does depart from the world of the affluent (and their servants, who are played for laughs), it is to portray this broken woman, Nina (Norvind).

A Mexico City-based theatre and soap opera actress born in Norway, Norvind is so devastatingly electric in the role that she just streaks past everyone else.  She manages to overcome what could have been a stereotypical interpretation, immersing herself in the character. No matter the film’s contemporary topicality, she is the principal reason to watch it.

Luckily for Loza, Fox International backs the project, which, with its promotional prowess and probably good advertising budget, will guarantee a decent opening in Mexico. But the absolutely unnecessary 141 minute running time and presumably less than enthusiastic word of mouth will curtail its theatrical run. Even the roster of stars well-known for their work in domestic soap operas will not be much help to this misconceived enterprise. Chances for international play, even in Spanish-language markets, are slim.

Just following the gay wedding party early in the film, a pretty young lesbian, Ivana (Servadilla), a close friend of the two grooms (and, completely unexplained, a pal of Nina), persuades newly-weds Jean Paul (Salinas) and Chemma (Guzman) to take care of the boy, Hendrix (Bruno Loza, son of the director), until his mom completes a stint in rehabilitation. (She doesn’t.) Hendrix is pretty smooth and clean-cut to be credible as the son of an impoverished drug addict who turns tricks when necessary to pay for her supply. As much as he misses his mom, he is seduced by the luxury of the couple’s huge home, with its large pool, perfectly appointed in a pretentious minimal style that is supposed to signify gay midlife domesticity. Hendrix also gets the chance to go to an English-language school.

Ivana has her own problems: She and her older girlfriend are trying to have a child in vitro. This is tangential to the main plotline, but then the whole film is overscripted. Ivana’s gay brother, a study in clichéd homosexual behaviour, is backing out of his promise to be the sperm donor.

While Nina searches for her missing child, her ex-boyfriend, a dope pusher and amoral operator, tries to sell the kid to a wealthy, childless couple. He owes a lot of money to a gang of crooks; the sale is his only hope for survival.

Hendrix is in and out of Jean-Paul and Chemma’s mansion, spending time in his mother’s rundown apartment whenever she discovers his whereabouts. On an anonymous tip, probably from the homophobic wife of the would-be child buyer, the police arrest the gay couple for kidnapping and child molestation. An ellipsis before the last shot informs us which of the homes Hendrix ends up at, but the film is so condescending to the under- and working classes that you can imagine what the outcome is.