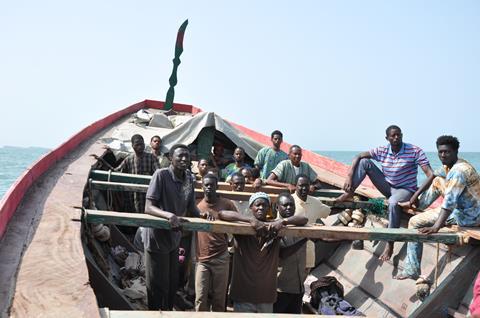 Given the dearth of African product on the international market, The Pirogue is bound to be assiduously courted by every single film festival and event. Neither the theme nor its treatment are new or original, but it is compact, well shot and effectively put together, successfully combining Western story-telling with plenty of local colour. And if theatrical audiences may balk at yet another film on immigration to Europe, television will certainly not remain indifferent to such a timely subject.

Intelligent casting has managed to fill the screen with the performers whose strong facial features and physical presence compensate for occasional lack of acting ability.

The plotline is familiar. A group of 30 Africans, picked from different ethnic origins to underline Senegal’s multi-national profile, embark on a pirogue (a small, flat-bottomed boat) that has to take them from the coast of West Africa, through the Canary Islands, to Spain.

Part an ongoing African, exodus, driven away from their homes by misery and unemployment, they leave their wives and children behind, holding on to dreams and promises that more often than not do not materialize, refusing to believe that Europe in crisis could possibly be worse than their own country, convinced that in a year or two they will either bring their families over to join them or start sending money home to build their own mansions, out of the fortunes that should be waiting for them overseas.

An experienced seaman, Baye Laye (expressively played by Souleymane Seye Ndiaye) reluctantly agrees to lead journey after the smugglers organising the trip offer him a considerable sum of money for the job. The journey itself is marked with the typical list of predictable hardships, from claustrophobia and sea-sickness to minor skirmishes between the passengers, from the discovery of a stowaway woman whose presence may be a bad omen to the encounter with another pirogue adrift in mid-sea which they can’t help short of endangering their own trip all leading to a climactic storm that threatens to put an end to all their hopes and dreams.

In between the incidents, the all too familiar plans of each individual person come up one after the other, from the humblest to the fanciest, from working the fields in Andalusia, to joining a band in Paris or becoming a soccer superstar. The downbeat ending clearly suggests how faint the chances are that any of these things will ever happen.

While the script doesn’t go much into characterizations and is mostly happy with instant labeling, intelligent casting has managed to fill the screen with the performers whose strong facial features and physical presence compensate for occasional lack of acting ability.  An experienced European crew provides high technical standards all through.