The Price Of Fame 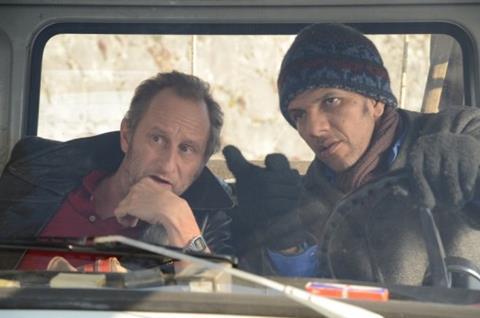 In French, this would be called une fausse bonne idee (a false brainstorm). Take the almost forgotten incident of two destitute immigrants stealing Charles Chaplin’s coffin a few days after the funeral and asking for ransom, and reconstitute it, not only as the hopelessly clumsy caper that it was but also as a tribute to the Cinema’s greatest comic genius.

As for Benoit Poelvoorde and Roshdi Zem, they have both successfully displayed in the past a lighter side to their personality but here they seem to have been instructed to play their roles straight.

Xavier Beauvois (Of Gods And Men) obviously did not intend to render the original details exactly as they were, but sort of adapt them in a general manner, but without either the touch or the pace needed to deal with a combination of comedy and social drama, all he can do is drag his feet for almost two hours, adding on a happy ending in the best Chaplin fashion.

The Price Of Fame (Le Rancons de la Gloire) sees Beauvois attempt a change pace after a series of distinguished achievements, but falters in the early stages when the film bears all the hallmarks of a sad melodrama without a shadow of a smile to alleviate it.

A small time Belgian crook, Eddy (Poelvoorde) comes out of jail to live with old pal Osman (Zem), and in exchange for a bed will help Osman’s daughter, Samira (Seli Gmach) with her French spelling. All this takes place in Vevey, on Lake Geneva, one of the most opulent corners of Switzerland, where Osman is working his bones off for a pittance while his wife Noor (Nadine Labaki) is in hospital with a dislocated hip and no chance of decent treatment without money.

On a TV set that Eddy has no doubt filched from somewhere, Chaplin’s death is announced, with the obligatory obituary mentioning the family’s fortune. Eddy, with nothing much to do and plenty of time on his hands, dreams up the idea of stealing the coffin from the cemetery and demanding one million francs in exchange. Honest Osman is very much against it, but when he sees no other way to pay Noor’s exorbitant hospital bills, he gives in. Puffing and huffing, they pull the coffin out of its place of rest, carry it in a stolen car to an empty field, dig another hole and then start calling the family to ask for the money.

All through it, Beauvois inserts reminders of Chaplin’s genius, whether it is brief sequences from his silent comedies such as The Cure; excessively lush, overstated versions of the Limelight theme in the soundtrack; arguments between Eddy and Osman with the dialogue fading out to let their mimics take over or everyday circumstances; from The Gold Rush art of eating spaghetti to The Circus, with a full scale circus hauled in out of nowhere at a late stage, to provide a few more quotes. The trouble is, however, that everything is directed with a heavy hand, the plot drags on, lingering on explicatory details that are self-evident, lacking any kind of distinctive personal touch and bound to be completely lost for those who will not seek these references intentionally.

As for Benoit Poelvoorde and Roshdi Zem, they have both successfully displayed in the past a lighter side to their personality but here they seem to have been instructed to play their roles straight, with no relation to Chaplin but no real social drama either. Young Seli Gmach, though rather under-used, seems more comfortable than both of them.

Production company: Why Not Productions