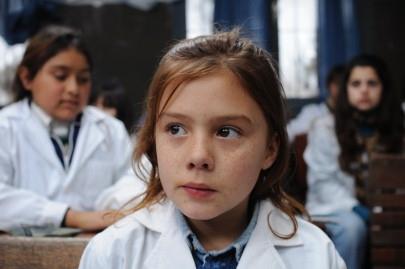 Notwithstanding the long list of participating countries mentioned in the credits, the Argentine identity of The Prize (El Premio) stands out loudly and clearly from the very first moment. Not only because Paula Markovitch, now a Mexican resident, was born in Argentina and the script is based on her childhood memories, but also because it deals in a direct fashion with one of the darkest periods in the country’s recent past and it was entirely shot in San Clemente de Tuyu, a small Argentine beach town, where Markovitch has spent much of her childhood.

Cinematography and sound are very effective and the desolate location essential for the authenticity, but an energetic story editor could have done wonders to improve the final result.

An episode in the life of seven year-old Cecilia Edelstein (magisterially played by vivacious, expressive Paula Galinelli Hertzog), hiding with her mother Silvia (Sharon Herrera) in a beach hut, this could have a distinct commercial chance as a perceptive portrait of childhood affected by miseries she cannot comprehend. It would need, though, to be cut to a manageable length and tightened up to re-enforce its strong points instead of diluting it with over-long, self-indulgent apparently personal recollections.

Huddling together in their cold, unfriendly ramshackle beach storehouse abandoned in the winter, hostile winds blowing high, the tide going up all the way to their door, sand dunes all around, Cecilia and her mother are evidently on the run. The father is nowhere to be seen, maybe running away on his own, arrested or possibly even dead.

All the little girl is allowed to say if asked about her identity, is that her father sells curtains and her mother is a housewife. In school, she befriends another girl her age, Lucia (a precocious and scene-stealing Laura Agorreca), they spend a lot of time together, with much of the film’s first half dedicated to their playing and chasing each other through the dunes.

But every once in a while Markovitch throws in chilling references offering a different perspective to the apparently innocuous tale. There is one episode when the teacher punishes the entire class until they divulge the identity of the culprit who allowed one of the pupils to copy a test’s results, offering the familiar morale of totalitarian regimes that squealing is good for society and informants should be thanked.

Then, sometime later the military invite the kids to write patriotic essays on the Army and its heroic soldiers, and to draw the flag on the back. At the last moment, Cecilia is prevented from revealing her true identity when her mother pleads with the teacher to let the little girl write the essay again, instructing her to say exactly the opposite of what she had previously written. And of course, she wins the prize for it.

Every time she sets out to deal with an actual scene involving the spare but well chosen cast working for her, Markovitch does a surprisingly good job for someone who insists she is first and foremost a writer. She does well both with the dramatic moments between mother and daughter and with the natural childish pranks of seven year-old kids.

But dealing with her own reminiscences, which are obviously dear and important to her, she simply fills up long and often dreary sequences, in which nothing much actually happens beyond adding to a grim, hostile atmosphere in the air, which has already been sufficiently and profusely established before. Granted, cinematography and sound are very effective and the desolate location essential for the authenticity, but an energetic story editor could have done wonders to improve the final result.