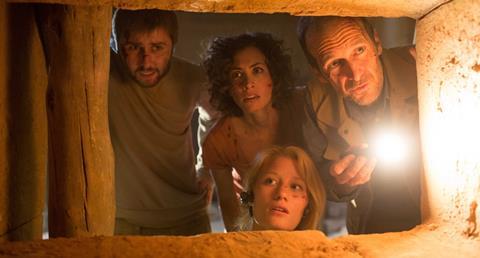 Egyptology-themed horror movies, initially inspired by tabloid tales of the curse of King Tut, kicked off with The Mummy in 1932 and have remained an occasional sub-genre ever since - most recently revived to commercial success with Universal’s fantasy-adventure Mummy romps.

The few scares are rote jumps copied from a dozen other films, with one moment that echoes both Alien and Deep Blue Sea.

The directorial debut of Gregory Lavasseur, Alexandre Aja’s favoured screenwriter (Haute Tension, The Hills Have Eyes, Maniac), The Pyramid kicks off as if it will be an up-to-the-minute essay in the form with the discovery of a unique three-sided pyramid in the Egyptian desert just as civil unrest sweeps the country.

With only hours before they have to quit the site, father-and daughter Egyptologists Holden (Denis O’Hare) and Nora (Ashley Hinshaw) send a robot probe into the pyramid only for it to get lost, prompting a hurried expedition - chronicled by Emmy-chasing TV journo Sunni (Christa-Marie Nicola) and her British cameraman Fitzie (James Buckley) – to retrieve the valuable gadget.

However, in a mash-up of the recent catacomb-set As Above, So Below and Howard Hawks’ camp classic Land Of The Pharaohs, the team find themselves trapped underground by ancient devices, harried by hairless mutant cats who resemble Dr Evil’s pet, lost in a puzzling labyrinth and ultimately come face to face with a very physical incarnation of half-man/half-jackal god Anubis.

Like so many contemporary horror films, this sets out to be an essay in the found footage genre - with characters humping cameras through narrow underground tunnels and green-lit footage showing the horrors going on the dark - but can’t quite stick within the confines of the format.

Screenwriters Daniel Meersand and Nick Simon (Removal) try to work up inter-group tension with the father and daughter arguing over approaches to archaeology and the cameraman (Buckley, from The Inbetweeners) constantly nagging the reckless journalist but this mostly serves to make unsympathetic characters more irritating, and a lot of tin-ear dialogue (‘why can’t you stop being an archaeologist and start being a human being?’ ‘out of the shitty room into the kitty tomb, which also smells like shit’) doesn’t help make the doomed souls onscreen any more engaging.

The few scares are rote jumps copied from a dozen other films, with one moment that echoes both Alien and Deep Blue Sea.  Suggestions that the Gods of Ancient Egypt might have been aliens, that the Freemasons are somehow mixed up in all this and that cutting edge archaeology (involving satellite imaging) is opening up new areas of mystery are just token.