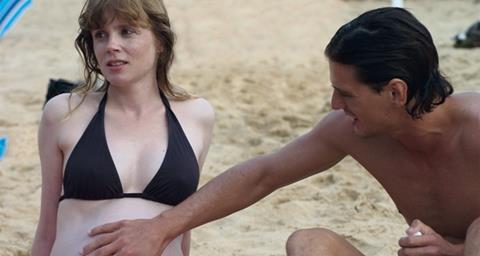 Francois Ozon’s second film this year is a return to the human drama for which he is best known after experiments with an English-language period piece (Angel) and fantasy fable (Ricky). Like the preceding Time To Leave and 5x2, it’s a bitter pill to swallow, peopled by brittle characters coping with intensely painful situations. But it’s also a bold exploration of outmoded social mores and unconventional relationships and which will please arthouse devotees and lovers of provocative French cinema.

A unique selling point in this film is that Ozon’s leading character, the radiant Isabelle Carre, was pregnant while shooting, echoing the pregnancy of her character Mousse

Sales prospects are along the lines of Time To Leave and 5x2 – small boutique distributors which specialise in foreign-language or specifically French films will be interested – rather than Ozon’s bigger crossovers Swimming Pool or Eight Women.

Those films also brought in an older audience which won’t embrace the scenes of drug use and gay love in The Refuge. The film had its world premiere in Toronto and next moves to San Sebastian on what will undoubtedly be a healthy festival run.

A unique selling point in this film is that Ozon’s leading character, the radiant Isabelle Carre, was pregnant while shooting, echoing the pregnancy of her character Mousse. Carre’s  “bump”, liberally exposed to the camera and the pawing hands of several characters in the film, is a key element in the intimate story.

Mousse is a heroin addict involved in what appears to be a loving relationship with another addict called Louis (Poupaud, who was in Time To Leave). In the opening scene, the two take delivery of their latest score in a smart Paris department and inject it into their worn and bruised veins.

The following morning Louis’ mother (Vernet) walks into the apartment and finds Louis dead and Mousse in a coma. When Mousse wakes up two days later, the doctor tells her she is two months pregnant.

Although Louis’ mother encourages her at the funeral to abort the baby, we next meet Mousse several months later in a beautiful house on the coast of France. Now heavily pregnant, she is visited by Louis’ gay brother Paul (Choisy) in her refuge.

She is initially hostile to him, indifferent to his presence and still suffering from the loss of Louis and isolated in her recovery, but she gradually relaxes with him and finds herself unexpectedly jealous when he begins an affair with a local man (Louis-Calixte).

Ozon doesn’t go into the nature of the Mousse/Louis relationship but slowly reveals more about Paul and his own heritage which raises questions about the nature of blood ties and family, and segues neatly into a surprising and moving denouement.

Carre’s vulnerability as the pregnant woman struggling with grief and addiction is palpable and illustrated by two particularly unusual and touching love scenes; Choisy, a popular  French singer who hasn’t acted before, is strikingly handsome but has a more limited emotional range than his co-star. He contributes a song to the proceedings which plays a key part in bringing the two characters closer together.