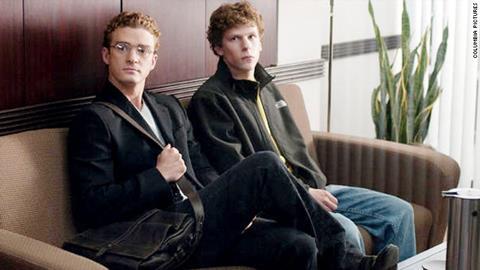 An intensely rendered account of how a group of young webpreneurs gave the world Facebook, director David Fincher and screenwriter Aaron Sorkin’s The Social Network is almost as clever and emotionally distant as its central character, digital age iconoclast Mark Zuckerberg. The Scott Rudin-produced drama has been generating blogosphere buzz for months and looks set to be a contender in awards season. But even with its hot young cast it could prove a bit chilly and impenetrable for mainstream moviegoers, especially those who haven’t yet bought into the Facebook phenomenon.

Surprisingly, given his reputation for fancy visuals in films like Fight Club and The Curious Case of Benjamin Button, Fincher plays it fairly straight here.

The Sony release opens the New York Film Festival this week and goes wide in the US on October 1, backed by a stylish and ubiquitous ad campaign. Sony’s marketing task - in the US and perhaps even more so when the film has its international roll out through October and November - will be to play up the universal themes of power, status and loyalty that underlie the cyber business story.

As portrayed in Sorkin’s script, based on Ben Mezrich’s non-fiction book The Accidental Billionaire, Zuckerberg (played by fast-rising Jesse Eisenberg, from last year’s Zombieland) was a brilliant but socially inept and dislikable 19-year-old Harvard student when he came up with the web site that would soon lead to the launch Facebook.

In the film, Zuckerberg’s only friend, Eduardo Saverin (new Spider-Man Andrew Garfield, from Never Let Me Go), provides him with seed money for his fledgling company. But Zuckerberg clashes with the Winklevoss twins (Armie Hammer and Josh Pence), wealthy and handsome Harvard rowing stars who think the new web-based social network was their idea.

As Facebook takes off, the idealistic Zuckerberg and more businesslike Saverin begin to have different ideas about how to develop the company. Then Napster co-founder and cyber rock star Sean Parker (played by singer-actor Justin Timberlake) enters the picture, bringing serious money into the venture, introducing Zuckerberg to the high life in California and pushing Saverin aside. Parker becomes the villain of the story, Saverin the hard done by foil and Zuckerberg the tragic hero, though the film gives him only the briefest of sympathetic moments at the very end of the story.

Surprisingly, given his reputation for fancy visuals in films like Fight Club and The Curious Case of Benjamin Button, Fincher plays it fairly straight here, using only subtle visual touches to steer the mood of the film while keeping the pace as rapid fire as the characters’ minds.

It’s Sorkin - best known, of course, for dissecting power and ego in the likes of A Few Good Men and TV’s The West Wing - who sets out to reflect the Facebook phenomenon, with its emphasis on self-creation, by presenting the story from the main characters’ differing perspectives. Much of the action is presented as flashbacks from the deposition hearings that result when Saverin sues Zuckerberg for a bigger share of Facebook’s success and the Winklevoss twins sue over their claim to have had the original idea.  The deposition scenes - like the film overall - are very talky, but they produce some terrific moments and give the film emotional ballast that would otherwise be entirely missing.

Though the film is very much Sorkin and Fincher’s show, Eisenberg is very impressive as the quietly tortured Zuckerberg and Garfield is likable without getting syrupy. Timberlake (previously seen in Alpha Dog and The Open Road) confirms his acting credentials.