The start of something Big 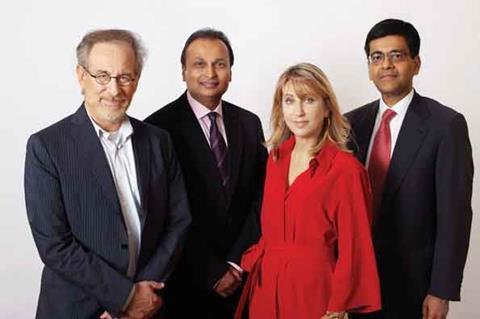 Amit Khanna, chairman of Reliance Big Entertainment, is keen to point out the Indian powerhouse is not merely a financial investor in Hollywood - through its 2009 deal with DreamWorks - but also a global player in its own right.

“We are a global integrated media content and entertainment company,” says Khanna when asked to describe the company’s overseas activities. “And we have the advantage that we are a 21st century company. We do not have the legacies of the past which most of the US studios now face as they reinvent themselves and spin off parts of the business that don’t fit.”

When Reliance ADA Group chairman Anil Dhirubhai Ambani decided to move into the entertainment business, the agenda was clear that the company would operate at an international level - and in the movie business that means working with Hollywood. CAA represented the company in the US, and also represented Steven Spielberg, so Reliance’s agent Emanuel Nunez spied a good fit.

“We are a 21st century company… We do not have the legacies of the past which most of the US studios now face.”

“Our chairman stated very clearly from day one that in whatever business we get into, we get into it as a global player,” Khanna adds. “So since we’ve begun our journey in entertainment we were looking at opportunities, and there’s nothing better than to partner with Steven Spielberg and Stacey Snider; that’s the best pedigree in Hollywood.”

On the Reliance side, the negotiations were led by Ambani’s right-hand man, Reliance ADA Group managing director Amitabh Jhunjhunwala, who now sits on the DreamWorks board, and Khanna, with Reliance’s lawyer Schuyler Moore of Stroock & Stroock & Lavan.

Introducing the two sides was the easy part. They started talking in 2008, before the global financial crisis really hit, and had to keep negotiations on track when bank finance became scarce and Spielberg’s initial distribution deal with Universal fell apart. Khanna confirms that Spielberg and Reliance agreed to split DreamWorks’ $50m overhead until a deal could be reached.

“We were clear and so were both Steven and Stacey that we’d like to persevere, and all the other interlocutors who were involved helped keep the deal active until it was completed,” Khanna says. “We don’t look at ourselves as financial investors in any sense, so it was more of a meeting of minds. Our chairman [Ambani] also met Steven, and myself and Amitabh travelled a lot to the US, and we developed a rapport.”

Khanna describes the DreamWorks deal, finally completed in August 2009, as the centrepiece of the company’s global ambitions, which is complemented by development deals with 10 Hollywood star-led production companies, also brokered by Nunez. Although development funding is notoriously risky, the thinking behind the deals is that they enable Reliance to secure international product from an early stage, rather than simply writing cheques.

While Reliance expects to co-finance bigger projects with the US studios - particularly those which have first-look deals with the production houses concerned - the first film from the development silos to enter production has been fully financed by the Indian company. Jesus Henry Christ, directed by Dennis Lee and starring Toni Collette and Michael Sheen, is produced by Julia Roberts’ Red Om Films, which does not have a first-look deal with a studio.

“We don’t look at outselves as financial investors, so it was more of a meeting of minds with Dreamworks.”

Although the deal with IM Global stemmed from Reliance’s need to find an international partner for its Indianlanguage product, it has already expanded way beyond that. At Cannes, Reliance and IM Global announced they will jointly finance DNA Films’ $45m Judge Dredd. Meanwhile Ford and US-based producer Deepak Nayar, who introduced Reliance to IM Global, are also working with Khanna and Jhunjhunwala to evaluate projects from the development silos.

The combination of knowledge and distribution expertise IM Global and Reliance bring to the table - from Western and Asian perspectives - should give Reliance more clout in its investments outside the DreamWorks deal. “When you look at what they’ve been doing for the past two to three years, there are opportunities like Jesus Henry Christ, like Judge Dredd - a couple more films like this and it makes a lot of sense,” Khanna says of his new partners.