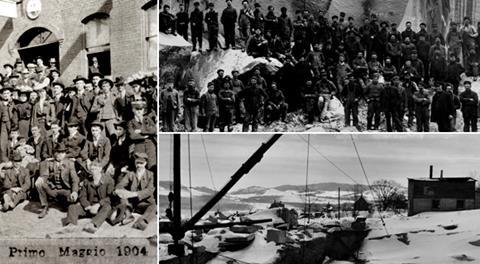 In the hands of Italian filmmaker Giovanni Donfrancesco, an outwardly simple documentary about a Vermont granite-mining town and the Tuscan anarchist and socialist quarrymen who migrated there at the beginning of the 20thcentury becomes something rich and strange. It’s a cinematic Spoon River Anthology that acts both as elegiac lament for a dying world of stone craftsmanship and poetic portrait of a town that inhabits a dreamspace somewhere between past and present, the dead and the living.

Though the theme is little more than a footnote in the history of incoming US migration, the film strikes some universal chords. This plus Donfrancesco’s painterly eye and the broader markets opened up by its English-language narration should push The Stone River towards further festival engagements after its Rome premiere, and may interest culture- and history-oriented broadcasters and cable channels.

A laconic caption sets the historical scene and briefly explains the premise of the film. At the beginning of the twentieth century, large numbers of marble quarrymen from Carrara in Italy crossed the Atlantic to work in the granite quarries of Barre, Vermont. In the 1930s, when the industry was already in decline and many quarrymen had succumbed to the occupational lung disease of silicosis, dozens of interviews with Barre’s inhabitants were transcribed by writers sent out under Roosevelt’s Federal Writer’s Project, with the remit to record oral histories in Depression-era America (one such writer was John Steinbeck, whose novel The Grapes Of Wrath owed a lot to his FWP experiences).

Donfrancesco selects several of these 1930s first-person narratives, and has them voiced by some of Barre’s present-day residents, each of whom takes on a single voice from the past. The effect is to blur the lines between past and present, especially when the director puts the testimony of a 1930s farmer into the mouth of a present-day one, or ‘casts’ a stonemason as a stonemason, or a present-day hard drinker as his 1930s alter ego.

Only rarely do we see the contemporary ‘actors’ actually speaking their lines: more often we hear the words in voice-over as we see them walking in the town’s suggestively-named Hope Cemetery (the film’s touchstone location), or going about their daily life and work, or simply standing silently, apparently rapt in thought, before turning to look into the camera.

Other scenes, many of them silent or scored by spectral music, show the quarries today, both in Barre and Carrara. These are mountains reduced to vast abstract sculptures, where cranes and heavy-duty excavators tussle with huge blocks and men hammer a line of wedges into solid rock to shear it off.  Stone, the film suggests, was a tough livelihood but also the proud medium of a lost generation of master craftsmen. However, it also turned out to be a killer – and poignantly, the men killed by silicosis, hard-drinking or in the course of a feud between anarchists and socialists were given memorials of stone – often carved by their surviving colleagues.

Shot mostly in a snowbound, wintry Barre, the film adopts a slow, melancholic pace that just occasionally drags. But mostly we’re held by the parallels and disjuncts between then and now, and a catharsis of sorts is provided towards the end by a moving rendition of Brother Can You Spare a Dime by a town choir that includes many of the ‘actors’ we have encountered in the course of the film, accompanied by archive photos and footage of the ghostly quarrymen predecessors they have been channeling.