The Stone Roses: Made Of Stone 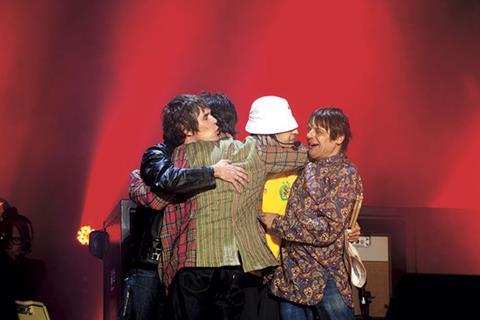 A rock-doc made with real verve and vibrancy, Shane Meadows’ tuneful and fascinating film charts the legend and resurrection of iconic Manchester band The Stone Roses, reflecting the power of their music as well as the turmoils of keeping a band together, and while Meadows is such a self-admitted fan that the film may lack a critical edge, The Stone Roses: Made Of Stone is a music treat for lovers of the band and anyone interested in contemporary music.

This is a band where it is about the whole and not the individual…and The Stone Roses: Made Of Stone wonderfully shows what a great band they were and still are.

For music fans of a certain age the comeback of The Stone Roses in 2012 was a major event, with their three huge outdoor Manchester gigs selling 220,000 tickets in less than 15 minutes. The film tracks the moment they announced their comeback and charts the journey from first press conference reunion to the gigs themselves, while layering in old footage of the band at work and play. Set for a theatrical release in the UK in early June, the film – and the Shane Meadows name – should attract strong sales and further festival exposure, prior to a strong life on home entertainment.

Shane Meadows – who made This Is England – puts himself into the film (and also clearly develops a great relationship with the band members) right from the start, recalling the moment he had the call from lead singer Ian Brown teling him that the Roses were reforming and being asked to make a film about the reunion. He is like a child in a sweet shop as he recalls his passion for the band, despite never actually managing to see them play.

The band consisted of cool singer Ian Brown; low-key but virtuoso guitarist John Squire; passionate and vibrant bassist Gary Mounfield (aka Mani) and skilled drummer Alan Wren (aka Reni), hailed as being the best drummer of his generation. The film does not attempt to tell every twist and turn of their early years – though footage of early gigs, home movies and monosyllabic interviews are fascinating – instead concentrating on the reunion as the foursome get to know each other again, and slip back into the groove as they rehearse for their return concerts.

The esteem in which they are held – especially in their native North West of England – is especially evident in the surprise warm-up free concert they hold in the town of Warrington, where they offer free tickets to the 1,000 capacity venue for fans who turn up to collect wristbands, but who have to show their allegiance by having album, CD, t-shirt or memorabilia to secure access. When filming their initial rehearsals and this warm-up gig, Meadows films in black-and-white only switching to colour when they set off on their mainland European tour prior to the massive Manchester concerts.

The only real moment of drama comes when Reni storms off stage at the close of their Amsterdam concert having suffered technical issues all night, an act that sees Brown walk in front of the audience to absorb their annoyance and to swear about Reni. It allows Meadows a brief moment to play the drama card and film himself in his hotel room wondering if the future concerts will go ahead…but it all leads nowhere really, because the film had opened with shots of Brown at the Manchester gigs.

The film ends with some beautiful and vibrantly shot concert footage as the band return triumphantly to Manchester and the Heaton Park gigs. Soaring and swooping shot and evocative footage from behind the drummer help deliver a sense of atmosphere, with Meadows making sure that there are an equal amount of shots of each band member. This is a band where it is about the whole and not the individual…and The Stone Roses: Made Of Stone wonderfully shows what a great band they were and still are.