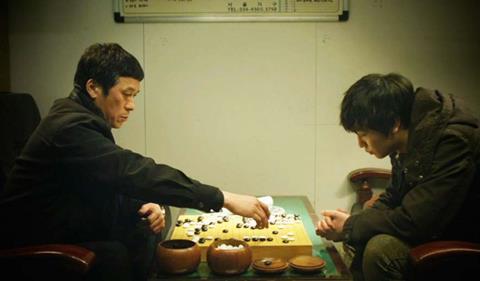 The game of Go is Life as it should be, fair, chivalrous, each player takes his turn and is given a chance to win. On the other hand, Life is chaotic, vile, brutal, unjust and deadly. For his debut feature, Korean director Cho Se-rae imparts this piece of wisdom in a film which consists, in equal parts, of men in suits breaking the bones other men in suits and of Go players confronting each other in countless matches, placing their black and white stones on the board and looking terribly concerned about it.

The one interesting aspect to come through remains the contact between the fatherless young Min-su, still trying hesitatingly to figure out his future, and the middle-aged Nam-hae.

The plot, or whatever there is of it, gets lost in between the violence and the Go matches and short of being addicted to the game or a fan of movie violence for its own sake, there is little chance that an audience will embrace this film.

Because of Go and the particular nature of this game, the film’s two main characters are engaged in opposite journeys. Min-su (Cho Dong-in), a sleepy looking adolescent is a graduate of the Korean Go Academy but since he lacks the confidence necessary to become a pro chooses to play the game for money, easily beating every opponent that comes his way.

Nam-Hae (Kim Roi-ha, one of the detectives in Memories Of Murder) is a smalltime gangster boss, brought up on the streets and used to using his fists to gain authority.  After accidentally meeting, playing and losing to Min-su in a Go club, while his goons were collecting the monthly installment of protection money, his taste for the ancient game is rekindled and he hires the boy to become his instructor.

As he goes deeper into the Go experience, he starts reviewing his own past in the perspective of the rules and requirements of the game and begins to  lose interest in the criminal world, becoming far more concerned with the future of his tutor, whom he encourages to face the challenge of a pro tournament and carve a legitimate future for himself.

Devoting most of the time to explore the two separate worlds, on the one hand gambling parlors catering equally to Go and card players, on the other hand, the constant skirmishes between the various gangs seeking control of the illegal businesses in town, Cho indulges in an interminable number of shots showing the Go board from every angle, to the point where it becomes simply tedious, if not worse.

As for the mayhem, erupting every few minutes at the slightest excuse, it rarely offers more than crude, vicious explosions of savagery, with the audience never expected to root for one side or another since apparently they are both equally vile. The one moment when civic responsibility enters into the picture, comes with the attempt of gangsters to forcibly empty a slum of its inhabitants, for the benefit of greedy building contractors.

The one interesting aspect to come through remains the contact between the fatherless young Min-su, still trying hesitatingly to figure out his future, and the middle-aged Nam-hae.  Fully supported by the performances of the two actors, it looks very much akin to a father-son relationship, the stern but supportive older man using the lessons of his own tough past to goad his son towards a safer, respectable, legitimate career. It’s just like any father, using his life’s experience to pull his son through the troubles of adolescence.