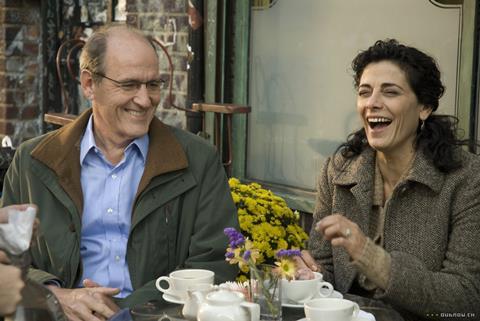 Mid-life crisis meets the US immigration crisis in The Visitor, Tom McCarthy’s film about a bored and frustrated academic who finds himself after discovering a couple living illegally in his Manhattan apartment.

McCarthy’s modest tale of friendship is a welcome alternative to the prevailing political rhetoric that promotes fear of ‘enemies in our midst’. Concern over the mistreatment of immigrants and government abuse of the Patriot Act make The Visitor a topical film, although it is unlikely to break out of indie circles in the US.

Sensitivity to US xenophobia among international visitors could help build momentum for foreign releases if the film plays at festivals outside the US. McCarthy also has a base of fans from his quirky 2003 indie success, The Station Agent.

McCarthy’s heartfelt, often funny, story is the self-discovery of Connecticut widower Walter Vale (Jenkins), who befriends the Syrian drummer Tarek (Sleiman) and the Senegalese street vendor (Gurira) who have rented his rarely visited pied a terre through the kind of scam that victimises immigrants in New York every day.

Their uneasy meeting turns into a tentative friendship and Walter, a stiff WASP who exhibits many symptoms of ‘white man’s disease’, begins playing the conga drum under Tarek’s patient instruction. Anything he does requiring rhythm is an instant joke, but the academic has a crash course in immigrants’ reality when Tarek is arrested rushing through a subway turnstile by cops who drag him away to an immigration jail.

When Tarek’s mother, Mouna (Palestinian actress Hiam Abbass), visits from Detroit, an unlikely romance is sparked between the man, who just lost his wife, and the woman who fears losing her son.

Alongside McCarthy’s tender treatment of strangers who would never meet, except for chance forming a human bond, is a chilling view of life for immigrants who have the bad luck of being caught by law enforcement.

Decisions seem to be made and carried out in the spirit of Franz Kafka. In McCarthy’s script, everything takes place under our noses, and most citizens are unaware or indifferent.

Jenkins gives a poignant performance as the awkward professor who slowly lets his feelings show, and then learns his tax dollars have paid for the deportation of a man who poses no threat.

As Tarek, Haaz Sleiman has the kind of effortless warmth that Charles is drawn to, but can barely express, while Danai Gurira as his wife frowns with a distrust that is hard to shed when you have no rights in your adopted country.