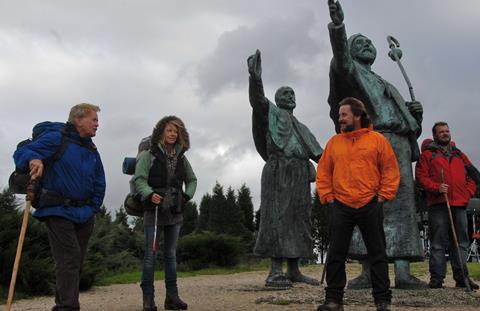 In The Way, a father (Martin Sheen) grieves on foot across Spain as he takes up the pilgrimage route of his headstrong son who died in the Pyrenees in a storm.

Estevez, who wrote the script and produced, directs the picaresque tale as a kind of pilgrimage vaudeville.

Director Emilio Estevez, Sheen’s son, is competent, though not inspiring, in the driver’s seat on this long chatty ride in an earnest road movie without cars.

The talk-athon of more than two hours, which lacks the drama of Sheen’s great journey films (Badlands and Apocalypse Now), will fight for a theatrical audience, despite Sheen’s fan base - yet his huge television public could be an asset in home video. One liability could be the film’s heartfelt American tone, which could put off British and European audiences, although the Spanish Tourist Board may want to excerpt sections as travel promotions.

The father’s saga begins in America. A phone call on the golf course to the comfortable ophthalmologist Tom Avery (Sheen) triggers his flight to Pied de Port on the French border, where he cremates his son’s body and sets off into Spain on foot with the son’s rucksack to leave ashes along the way.

The director has a feel for bonhomie, as one might expect in a film that is a family effort.

Van Wageningen can be a delight to watch as the fat man who undertakes the walk-athon because his wife won’t sleep with him anymore. Along the pilgrimage trail, centuries-old statues warn travelers of deadly sins, and the Dutchman embodies gluttony — he can’t resist the temptation of food. Nesbitt has some of the film’s best lines as the writer who gave up his literary dreams to write travel stories.  Jabs at Americans by all but the grieving Tom reflect the Sheen family’s left-wing tilt.

Estevez, who wrote the script and produced, directs the picaresque tale as a kind of pilgrimage vaudeville, with each traveler given scenes of clownishness and confession, as Tom walks with them toward self-discovery. The only thing missing in the quartet is Oprah to moderate.

In his fourth feature, Estevez brings no special visual flourish to the journey. Fortunately, there’s plenty of scenery and repartee to keep the pace going briskly. His mission is to foreground his father, playing a parent, thrown away from the privileged Los Angeles suburbs, who begins his walk resenting his son’s death as much as he mourns it.  The rambling screenplay provides an odyssey of hard-knock experiences to teach him lessons.

Sheen’s character has an aversion to sermonising and pop psychology. To its credit, The Way never gets overly preachy or pure in its redemption story.  As the pilgrims drink and carouse, the film reconnects us to the Chaucerian bawdiness that’s always been part of pilgrimages. What’s missing along the way with the wine and misadventures is a sense of the desperate darkness that comes with the loss of child. The film never connects with that pain. You get the feeling sometimes that making The Way might have been too much fun.

DP Juanmi Aspiroz is competent as his camera follows the four through valleys and fields and hostels and bars, serving up pleasant landscapes that call to mind the photogenic postcard Provence of Ridley Scott’s A Good Year (2006). Yet anyone who knows the well-traveled pilgrimage trail will find that he misses much of its natural and architectural magic.  Like the cinematography, production values throughout are solid, but not sublime.

In Estevez’s hands, the film’s pilgrimage feels like group therapy, a talking cure that can seem endless.  If the Estevez-Sheen collaboration continues, like the Hope Crosby “Road to…” series, the product could get shorter and more refined.