The We And The I 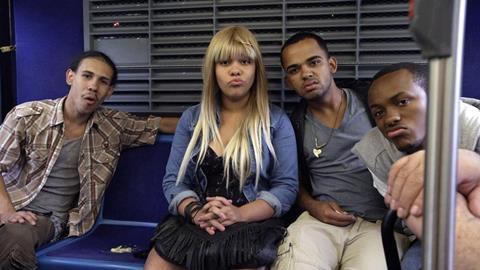 Michel Gondry’s slow-burner The We And The I is a film that needs an audience to stay through to the end, and while initially a little heavy-handed as it sets up its character-heavy format its strength comes as its young, inexperienced, cast make their impact on the film, with the closing scenes powerful and subtly moving.

The film could perhaps be a little tighter but this bus journey is eventually worth the wait.

While very much US-based, the story will strike a chord with urban audiences around the world and while the challenge will be reaching out to a youth audience who might more easily appreciate that language and attitude of the main characters, it also has strong art-house qualities. The opening film of Director’s Fortnight, it received a warm response at its premiere screening, with Gondry’s trademark quirkiness and visual style fitting in easily alongside the more structured aspect of the storyline.

The film makes a resolute change of direction from Gondry’s last film, when he wrote and directed the big-budget adaptation of The Green Hornet, but with The We And The I he is clearly back in his comfort zone as he tackles how teens behave and interact together, all set against the backdrop of a bus journey in the Bronx in New York.

The format is relatively simple. On the last day of high school a disparate group of students pile aboard their regular bus journey home. Initially belligerent, antagonistic and many of them plain rude, as the bus wends its way through the urban landscape many of the characters become more and more exposed – and some honest – and while the dramas and conflicts are modest their importance to the youngsters are powerful and important.

While pretty much all of the teens who board the bus get some form of screen time – which was always Gondry’s intention – the interweaving stories really have main focus on a handful of characters. These include Laidychen (Laidychen Carrasco) who is planning her sweet sixteen party; Michael (Michael Brodie) who has girlfriend issues and getting increasingly irritated with the behaviour of his pals in the back row of the bus, and Teresa (Teresa Lyn) who had dropped out of school and upset because her physical shape has changed due to the amount of anti-depressants she is on.

When they first board the bus the teens are exuberant and excited, upsetting some passengers with their horseplay and loud, overlapping, conversations. For the audience too some of them can be irritating, but as the journey continues and more and more of them get off the bus, the last half-hour of the film allows focus on two beautifully written and gently moving conversations – between Michael and Alex (Alex Barrios), who until this moment has barely featured in the film, as they talk about families and what they plan to do in the summer, and between Michael and Teresa as they come to terms about what bonds them together.

The film could perhaps be a little tighter – especially in the opening half hour as the varied characters jostle for screen time – but this bus journey is eventually worth the wait as relationships are revealed, attitudes change and real personalities unveiled.