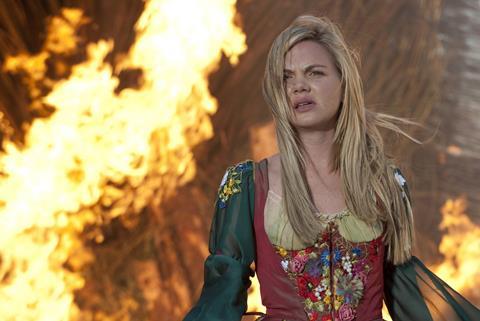 Forty years on from cult classic The Wicker Man, writer/director Robin Hardy revisits the struggle between trusting Christians and malevolent pagans as a flippant, tongue in cheek black comedy.

Fatally, the horror element will seem mild-mannered and unremarkable to even the most generous fan of the genre

The Wicker Tree’s quaintly old-fashioned mixture of Carry On-style double entendre, mild eroticism and campy horror is sure to disappoint fans who have waited long and patiently for a new Hardy film. In the Uk, the film is receiving a release in Scotland, but not in England.

The Wicker Man maintains a prime position in the British horror pantheon, suggesting a potential ready-made audience for The Wicker Tree, especially on DVD, although perhaps more as a midnight madness curio or eccentric footnote to the original. Anchor Bay recently acquired all rights in the UK, US and Canada for a 2012 release.

Based on Hardy’s novel Cowboys For Christ, The Wicker Tree follows more lambs to the slaughter. ” Born Again” Christian singer Beth (Britannia Nicol) and her gormless boyfriend Steve (Henry Garrett) leave Texas to spread the gospel among the Godless heathens of Scotland.

They are warmly welcomed to the Borders town of Tressock by Sir Lachlan Morrison (Graham McTavish) and the local community who smile indulgently at the couple’s naive belief in chastity and virtue. Soon the innocent duo are educated in the beliefs that the natives hold dear.

Crudely satirical in its approach to the American evangelists, The Wicker Tree is often amusing in its archly knowing approach to familiar subject matter. Even assuming the comic tone is always intentional, the ropey dialogue, rhubarbing extras, hammy performances and tired horror movie clichés seem more reminiscent of the dog days of Hammer or vintage guilty pleasure television series like Tales Of The Unexpected. Fatally, the horror element will seem mild-mannered and unremarkable to even the most generous fan of the genre.

Honeysuckle Weeks’ game performance as randy local Lolly is one of the stand-outs from an able cast and The Wicker Man veteran Christopher Lee makes a welcome but very brief cameo appearance.