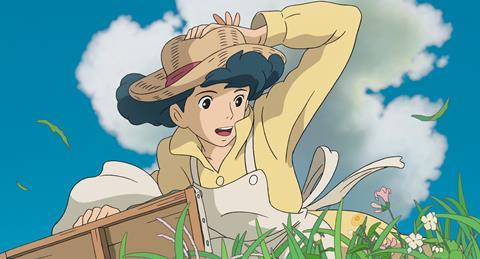 Japanese animation genius Hayao Miyazaki’s first film for grown-ups – or perhaps that should read ‘first film likely to bore the under-tens’ – offers plenty of those moments of 2D cine-painting joy and ravishment that we have come to expect from the 72-year-old maestro. But the paradox of the exercise is that in presenting a precise historical setting and period (the military aviation industry in Japan between the two world wars) and partly shutting out the fantasy world of films like Spirited Away or My Neighbour Totoro, Miyazaki loses some of the imaginative force and shape-changing magic that draws hordes of adults even to his ‘children’s’ films.

Miyazaki fans will spot some fresh new touches here, some of them related to the art of the twenties and thirties, with German Expressionism, Fauvism and Social Realism among the movements referenced in the look of certain scenes.

The film is inspired by the life of Jiro Hirokoshi, a Japanese aviation engineer who designed the ‘Zero’ warplane, which for most of the Second World War was acknowledged as the finest fighter plane in existence – though Miyazaki has declared that the film’s ‘Jiro’ character also contains elements of author Tatsuo Hori, a contemporary of Hirokoshi, whose novel The Wind Rises (itself inspired by a Paul Valery poem) gives the film its title.

Still riding high at the local box office six weeks into its home run, this is certainly Miyazaki’s most Japanese film; some of its interior scenes even carry a hint of animated Ozu. In some ways it’s also a guilt-expiation exercise, allowing the director and his compatriots to celebrate the country’s impressive 1930s leap from aviation minnow to technological trailbrazer while condemning the use to which this military technology was put.

While there’s no doubt that this agenda is sincere on the part of an aviation-obsessed director who has been attacked by Japan’s nationalist right for his pacifist views, the rest of the world will be left to admire the animation, be mildly charmed by the story and characters, and attempt to keep up with (and be interested in) the finer points of fuselage construction.

Jiro is first presented as a schoolboy who, in a dream, meets his hero, the pioneering Italian aeronautical engineer Count Gianni Caproni. These dream encounters with Caproni will recur throughout the film, which follows Jiro as he attempts to realise his ambitions. All goes fairly smoothly for him, if not for a country in the grip of the Great Depression, as he sails through university and is taken on by Mitsubishi’s aircraft design department, but here frustrations follow as a prototype fighter plane designed for the army performs badly in trials.

Sent to Germany, Jiro observes at first hand the superior technological expertise of the Junkers aeronautical factory and the brute force of the German military machine; back in Japan at a health resort, he meets up again with a sweet girl, Naoko, who he had helped years before during the 1923 Great Kanto Earthquake. The flame of love is reignited, and although Naoko has tuberculosis and refuses to marry until she’s better, the two become engaged.

It all moves along briskly enough, and when we’re frustrated by the leisurely plot we can fall back on other pleasures: entertaining caricatures like Kiro’s pint-sized boss Kurokawa, a typical Miyazaki grumpy old man, who of course turns out to have a heart of gold beneath his gruff exterior; and the visual skill of an animator who is still at the height of his powers. Miyazaki fans will spot some fresh new touches here, some of them related to the art of the twenties and thirties, with German Expressionism, Fauvism and Social Realism among the movements referenced in the look of certain scenes.

Darker notes creep in towards the end, where Jiro’s ten creative years (we’re told that this is the usual inspiration window for most artists and designers) culminate in the creation of a craft as destructive as it is beautiful, and a cemetery of crashed warplanes evokes the pity and pointlessness of war. It’s a necessarily dour finale, and for a non-Japanese audience, it feels like we’re on the outside looking in on a national trauma – something that was emphatically not the case in Porco Rosso, Miyazaki’s other great feature-length paean to the heroic years of aviation.