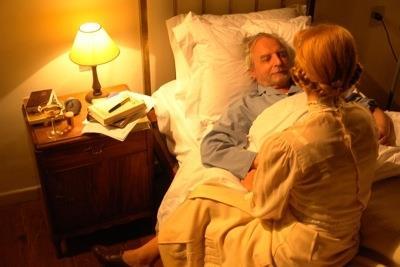 This may well be the smallest, most intimate and personal film that Carlos Sorin has yet made. Taking place over the course of one day, mostly inside a remote country house, The Window painstakingly maps out the last hours in the life of an octogenarian writer. Confined to bed under doctor’s orders due to a heart complaint, he is gently nursed by two devoted women. Sorin’s loving care and attention to detail is evident throughout the picture, which will endear The Window to critics and more mature viewing audiences, but the nature of the subject and the deliberately slow pace of the proceedings may severely restrict commercial prospects.

Starting and ending with a childhood dream which vividly brings back memories which ailing Don Antonio (Laretta) had completely repressed, Sorin’s camera follows his protagonist as he slips in and out of consciousness. He throws his weight around with the staff; he requests a piano tuner to come and fix the instrument in the living room in honour of his pianist son who he expects to visit later; he also gets ready to celebrate the rare visit with a vintage bottle of wine he asks to be brought up from the cellar. At a certain point, even though he has an IV drip, he gets up, opens the windows, notices the glorious day outside and decides to go for a walk. A few minutes later, exhausted, he drops unconscious in the middle of a field. When his son finally arrives, at the end of the day, he is back in bed, barely capable of raising a glass of stale champagne which he isn’t allowed to taste, as his life ebbs away.

In the absence of plot, Sorin opts instead for details, which he builds up into a structure. Very little escapes the director’s eyes as he wryly observes the cranky suspiciousness of old age, the son’s interest in selling the property, the ticking of clocks magnified on the soundtrack as a reminder that time is an essential element. The contrast between the dark, chilly indoors and the bright, sunny day outside is powerfully underlined by Julian Apezteguia’s camerawork, and if the pace is at times infuriatingly slow, it is no slower than rhythm life itself takes at its final stages.

Antonio Laretta, an award-winning Uruguayan writer, actor and stage director, plays the lead with a subtle understanding, his expression often more eloquent than his dialogue. Maria Carmen del Jimenez and Emilse Roldan, as his caretakers, seem overly-conscious of the camera following them around, but the film’s casting flaw is with Claudia Peterson, playing the the daughter in law and delivering a hysterical portrayal of a modern woman obsessed with her cell phone which comes close to caricature.