The Woman In The Fifth 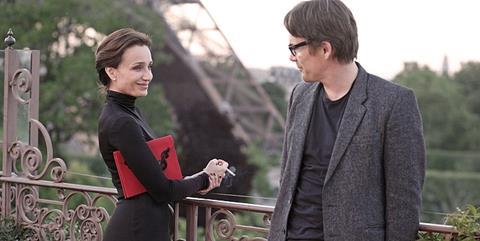 Director Pawel Pawlikowski ventures into the dark heart of classic Roman Polanski territory with The Woman In The Fifth, a bewildering, Kafkaesque conundrum set in the murky shadows of an unfamiliar Paris.

Despite the efforts of the cast and the craft on display, you can only conclude that there is less here than meets the eye.

There are echoes of Repulsion and The Tenant in an adaptation of the Douglas Kennedy novel following an exiled American writer at war with his inner demons and struggling to retain a grasp on his sanity. Elegantly framed and executed, it maintains an air of teasing mystery but never arrives at a satisfactory conclusion.

Audiences are more likely to experience head-scratching frustration than savour the enigmatic intrigue suggesting limited arthouse possibilities at best for Pawlikowski’s first feature since My Summer Of Love (2004).

Ethan Hawke stars as American writer and academic Tom Ricks. He arrives in Paris to build bridges with his estranged wife Nathalie (Delphine Chuillot) and his six year-old daughter Chloe (Julie Papillon). That is what he tells the authorities and he may even believe it himself. Nathalie slams the door in his face and calls the police.

We are made aware that there is a history of violence and a restraining order in place. Our sympathy remains with Tom as he is robbed of all his worldly goods and takes sanctuary in a seedy hotel run by Sezer (Samir Guesmin).

Sezer offers him work as a night watchman and waitress Ania (Joanne Kulig) offers her support as he travels through contrasting worlds of danger and promise, privilege and poverty, reality and fiction in which he appears to find a muse in the domineering translator Margit (Kristin Scott Thomas).

Hollywood studios are often accused of making films that spell everything out and lead the viewer by the nose. The Woman In The Fifth goes too far in the opposite direction, leaving the audience to fill in all the blanks and ponder the many loose ends that go unexplained.

There are hints and suggestions that Tom is not in his right mind and responsible for more than he will admit and more than is ever explained. The film is not so much an exercise in ambiguity as a project that feels incomplete and underdeveloped.

There are elements of absurdist humour in Tom’s war with his aggressive hotel neighbour Omar (Mamadou Minte) and a notion that we are entering some Alice In Wonderland fairytale landscape as Tom disappears into a hole of his own making and there are conversations about magical forests and a fondness for close-up images of beetles, bugs and spiders.

It is clear that Tom is an angry, restless soul but Ethan Hawke tends to underplay the emotions of this somewhat passive character. Kristin Scott Thomas brings a typically steely presence to the role of the siren-like Margit although her character may be the most unfathomable of them all. Despite the efforts of the cast and the craft on display, you can only conclude that there is less here than meets the eye.

Screenplay: Pawel Pawlikowski. Douglas Kennedy based on his novel