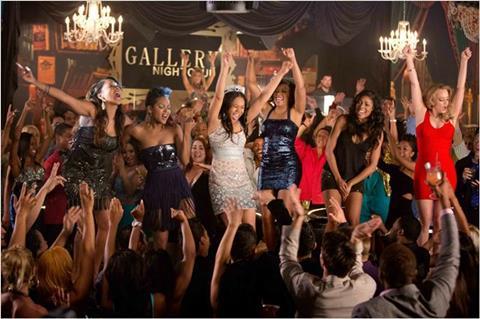 A busy, energetically pitched ensemble comedy that ultimately elicits more weariness than laughs, director Tim Story’s follow-up to surprise spring 2012 hit Think Like A Man, adapted from Steve Harvey’s 2009 book Act Like A Lady, Think Like A Man, can’t decide whether it wants to assay modern relationships or just thrash around in the wading pool of Las Vegas-set clichés. It settles for waving its arms, making noise and pointing out that change unsettles all of us, men and women.

Director Story (Barbershop, Fantastic Four) is capable of locating humor amidst resonance, but here he seems beholden to some invisible, overcharged pace car, chasing loud, cheap laughs in a manner that reliably undercuts any moments of more emotionally grounded reality.

Think Like a Man Too follows on the heels of strong box office performances by several other comedies this spring and summer, and appears on track to best fellow wide opener Jersey Boys, with an expected haul in the same range as the robust $33.6 million bow of its predecessor. International returns, where the original film grossed less than five percent of its cumulative $96 million haul, will be meager, but healthy word-of-mouth and ancillary income should make this a tidy earner.

As Candace (Regina Hall) and Michael (Terrence J) prepare to tie the knot, all of their friends gather in Las Vegas for a weekend of bachelor/bachelorette festivities, where best man Cedric (Kevin Hart) tries to whip everyone into a fervor. While Michael’s overbearing mother Loretta (Jenifer Lewis) threatens to come between her son and single mother Candace, the other couples each have their issues as well. Kristen (Gabrielle Union) and Jeremy (Jerry Ferrara) worry about trying to get pregnant and becoming parents; Zeke (Romany Malco) and Maya (Meagan Good) find themselves in conflict over his “player” past; Dominic (Michael Ealy) and Lauren (Taraji P. Henson) field separate job offers in different cities; and otherwise happily married Tish (Wendi McLendon-Covey) and Bennett (Gary Owen) stick out with their decidedly uncool miens.

Returning scribes Keith Merryman and David. A. Newman ably deliver delineated characters. But they’re so busy servicing the various relationship crises of their couples that there’s a paucity of jokes that push past anything other than the most obvious, surface-level set-ups. If the first film traded on friction between established types (e.g., “The Mama’s Boy,” “The Non-Committer,” “The Player,” “The Girl Who Wants the Ring”), the extent to which the advice of Harvey’s book still serves as an inspiration seems here to be limited to a couple rejoinders and a scratchy, ill-fitting voiceover narration from Hart, in which he randomly invokes basketball analogies.

Otherwise, the script lumbers through familiar sequences and set pieces before a finale that dutifully includes series of pat resolutions for each couple and their attendant issues. Whether it’s setting up a celebrity cameo (from boxer Floyd Mayweather) that doesn’t fully pay off or having the movie’s big wedding ceremony crisis solved by an ancillary character (Jim Piddock, playing a hotel butler) instead of any of the leads, Think Like A Man Too consistently misses out on chances to more deeply plumb its at-odds characters for comedy, all in the name of capital-L life lessons learned.

Director Story (Barbershop, Fantastic Four) is capable of locating humor amidst resonance, but here he seems beholden to some invisible, overcharged pace car, chasing loud, cheap laughs in a manner that reliably undercuts any moments of more emotionally grounded reality. Certain to get the most attention is a jarring mock music video in the middle of the movie, set to Bell Biv DeVoe’s Poison, and complete with fish-eye lenses and fourth-wall-breaking posturing. That the film acknowledges the ludicrousness of this bit with a credit box in the corner upon its completion does little to alleviate the problems created by stepping outside of itself and basically acknowledging the phoniness of everything going on in its story.

The movie is otherwise riddled, too, with lapses in judgment and inattention to detail — as when Cedric turns on a stereo and blasts a song in an early scene, enjoying a luxurious hotel suite while dancing around in his socks and underwear, only to have that music immediately disappear when a character interrupts him.

Ealy, who exudes a sort of calmness and quiet exasperation, is the audience’s most capable stand-in, though Union, Good and Malco also deliver good work. Dennis Haysbert scores plenty of reaction in a small role, replete with a recurrent, suave musical cue.

The always voluble Hart, meanwhile, pushes his demonstrativeness past patience’s breaking point and almost all the way back around again; watching his over-caffeinated schtick summons forth a certain sense of wonderment, because one keeps waiting for the tears-of-a-clown breakdown. That doesn’t happen in Think Like A Man Too. But maybe someday Hart will take a bold leap, and give viewers a genuine glimpse behind his performer’s curtain. It could be interesting.

Screenplay: Keith Merryman & David. A. Newman, based on the book Act Like a Lady, Think Like a Man, by Steve Harvey