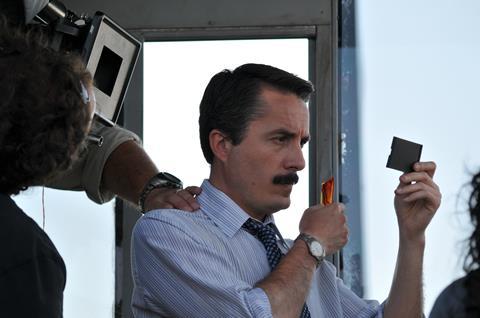 The crushing shadow of a domineering father bearing down on his offspring, a recurrent theme in world cinema and most particularly in the Turkish one, is given a minimalist but effective treatment in Toll Booth (Gise Memuru), the debut feature of Tolga Karacelik, which has already been awarded for Best First Film, Best Actor and Best Cinematography in the Antalya Golden Orange Festival.

Shot with sober precision, whether dealing with reality or flights of imagination, and enormously assisted by Ercan’s performance in the lead.

Though facing the formidable challenge of putting a face on the nondescript operators manning highway toll booths, Karacelik manages to come up not only with a believable portrait of a 35 year-old man still struggling to reach emotional independence, but also with a tightly knit, closely controlled picture that should easily find its way into international festivals and art house cinemas.

Kenan (Serkan Ercan), a quiet, dapper, neat, unsmiling and uncommunicative toll booth operator on one of Turkey’s busier highways, keeps his colleagues at arm’s length and prefers never to enter any conversation with the passing drivers at his booth beyond quoting the fee and giving the change.

Every evening he goes home to his ailing father (Zafir Diper), who is taken care of by Nurgul (Nergis Uzturk) a particularly loquacious but very amicable, unmarried neighbour. After he accompanies her to her home, he spends the rest of the evening in front of the television, to keep his father silent company, and once he puts the old man to sleep, he goes out in secret and hopelessly tries to fix the family car left in disrepair for years.

When, one day, his peculiar habit of talking to himself interferes with his work just as a supervisor on hand, he is taken out of his regular booth and sent to a faraway, remote post, where hardly any cars are ever crossing.

Now, his days are emptier but longer, he has more time to feel the weight of his empty, dreary, humdrum life. His grumpy father, who has never missed a chance to remind his son what a helplessly insignificant, clumsy fool he is, insists he take Nurgul to tea, for it is father’s role to choose the right woman for the son. Kenan, however, would much rather run away with the pretty blonde woman (Nur Aysan) he fantasises about, one of the rare drivers crossing at his remote toll booth every day at the same hour.

The audience follows him through the nightmares taking him back to his mother’s death and through his sunnier daydreams which constantly get in the way of his actual existence, until the inevitable moment comes when can’t tell them apart anymore and he completely loses his grip on reality.

Karacelik chooses to tell the story from beginning to end through the eyes of his protagonist, the audience is asked to share and identify with his point of view, his personal crisis ever more enhanced as his departures from reality are growing longer. If the brief early flashback inter-cuts look almost like an out-of-place error, they gradually begin to make sense as there are more of them coming along, while the long daydreaming fantasy introduced towards end almost suggests that the film itself is turning into fantasy, which luckily enough it does not.

Shot with sober precision, whether dealing with reality or flights of imagination, and enormously assisted by Ercan’s performance in the lead, perfectly conveying the insecure confusion hiding behind his strict, rigid behavior, this is a solid companion piece to the similarly themed Majority which played with considerable success in last year’s Venice.