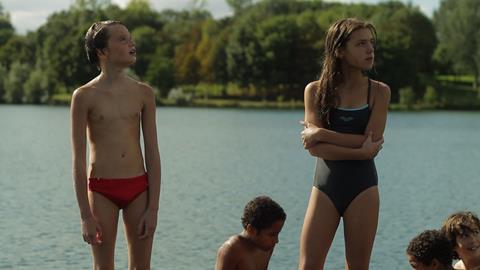 The politics of gender get an unusual exploration in the world of pre-teen kids in Celine Sciamma’s Tomboy, a simple conceit blessed by the same naturalistic performances and fluid camerawork that marked out her feature debut Water Lilies.

The story of a 10 year-old girl, a tomboy, pretending to be a boy in a new circle of friends is one built on deception and it could easily have travelled on a doom laden road towards discovery and tragedy. Instead Sciamma avoids the obvious and takes a more gentle route, honing in on the details of interactions between children, the joyful playtime, the rituals and the arrival of preconceptions which will shape their prejudices as they grow older.

Although it doesn’t possess the dramatic momentum to achieve the profile of, say, Ma Vie En Rose or Wild Reeds on an international level, this small French gem will find distribution everywhere. Its slot as the opening night film of both Panorama and Generation in Berlin this week can only help draw attention to it as it begins a no doubt busy run on the festival circuit.

One of Sciamma’s achievements here, as in Water Lilies, is to cast brilliant young actors, namely Zoe Heran as the tomboy Laure and Malonn Levana as her six year-old sister Jeanne.

Laure, Jeanne and their parents (Cattani, Demy) move to a new neighbourhood in the summer holidays. Laure looks, dresses and acts like a boy and neither of her parents mind. Her mother is heavily pregnant with a third child, a boy this time, and her father is away working during the week.

She soon makes friends with a local girl called Lisa (Disson) and introduces herself as Michael, a boy. Lisa in turn introduces her to the gang of kids who roam around the neighbourhood in a pack and pretty soon Michael has blended in, playing football with the boys with his top off, responding to Lisa’s advances with
Laure even constructs a fake penis out of modeling clay which she inserts in her trunks when the gang goes swimming one afternoon.

When Lisa comes to call one day and asks for Michael, Jeanne answers and plays along with the deception, swearing silence to their parents so long as Laure takes Jeanne out with the other kids.

Of course discovery by parents and friends isn’t far away, but in the meantime, Sciamma depicts the ways children conform to gender stereotypes or at least to notions of masculinity and femininity they believe are correct. What’s ironic is the fact that Laure/Michael is most aggressive in embracing those stereotypes in an effort to be what she thinks will be a convincing boy, whether gallantly fist-fighting over his sister’s honour or scoring goals at football. You can see why Lisa falls for him.

Heran gets it just right. Not only is she/he piercingly photogenic, but she affects the self-conscious swagger of a boy with striking authenticity. It is sometimes hard to think you are looking at a girl, and you understand why Laure thinks it is unfair she is not a boy, especially when her newborn brother is born with his gender handed to him on a plate.

Levana is another natural, oozing wit and wisdom beyond her six years. The relationship between the two siblings is full of joy and tenderness, and Sciamma captures little moments between them that inform the film’s world of children.

But even if it is a world of children, the rigid little community is also a microcosm of wider society. How Laure will evolve in a culture which wants to pigeonhole her is open to personal interpretation. Some audience members will think it’s just a phase. Others that she will carry her gender frustrations into adulthood.