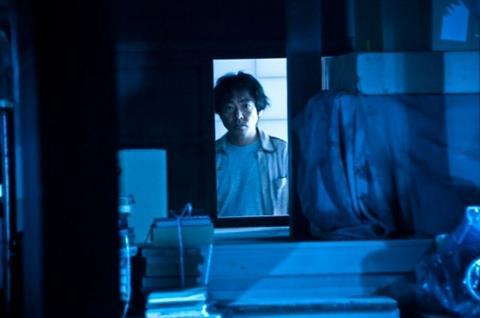 It’s difficult to make a guy in a giant furry rabbit suit scary, but almost ten years after the first theatrical instalment of the Ju-on (Grudge) horror film franchise put his name on the genre map, director Takashi Shimizu does just that in his latest 3D psycho-horror feature. Tormented 3D (Rabitto Horaa) makes a fairly good stab at keeping us guessing how much of what we’re seeing is real and how much is the delusional fantasy world of one or more characters. As well as delivering frights aplenty, the film will appeal to 3D geeks, as it uses the format originally - especially in a film-within-the-film sequence set in a cinema.

The film’s Venice premiere came hot on the heels of the announcement that Fortissimo had sold US rights for Tormented and the director’s 2010 Shock Labyrinth 3D to Well Go for the US. Though they don’t share characters or storylines, both films mine childhood nightmares and share scary toy motifs, as well as abandoned amusement park and hospital locations - so there’s ample scope for a DVD box set.

Theatrical action outside of Asia is a tougher nut to crack: for all its well-managed tension, neat 3D effects and classy camerawork courtesy of Hong Kong cinematographer Chris Doyle, Tormented doesn’t have the one excellent idea that gave Ju-On: The Grudge a small theatrical run in the US and elsewhere before Shimizu’s own, well-received US remake emerged to top the box office in 2004.

Cute Daigo (Shibuya) - a boy of around nine, at a guess ­- lives with his older sister (or half-sister) Kiriko (Mitsushima). She’s mute - though not, as it will turn out, from birth. Sensitive and a little fragile, Kiriko works as a librarian at her little brother’s primary school - where in the opening sequence, we see Daigo smashing in the head of a wounded rabbit in the school pet farm and spattering his sister with blood.

Voiceover tells us he did this to put it out of its misery, though his classmates immediately brand the shy, incommunicative boy as ‘the rabbit killer’. The siblings’ father (Kagawa) is a creator of pop-up children’s books (a job no doubt chosen for its 3D potential), notably a version of The Little Mermaid which becomes a recurring theme. He has retreated obsessively into his work ever since the death of his second wife, who we assume is Daigo’s mother and Kiriko’s stepmother.

In a sequence that may or may not be a dream (like so many in the film - some signalled, some not), Kiriko perhaps unadvisably takes little bro to the cinema to see a horror film - where a toy rabbit floats out of the screen towards us, and Daigo. But when he reaches up to grab it (as we almost do ourselves, so realistic is the stereoscopy), it drags him with it into the screen. Soon we’re in a scary fairground; and the soft-toy rabbit has become a full-size guy-in-a-rabbit-suit rabbit.

This image is kind of preposterous and scary at the same time, like much of the film. But Shimizu and his co-scriptwriters do a decent job of feeding us scraps of backstory that gradually add up to some kind of explanation, without quite allowing it all to make sense. Which is not necessarily a bad thing, as ‘what just happened?’ after-film discussions come bundled with the J-horror genre.

And there’s enough style and atmosphere here to ground the film’s more unlikely or baffling moments in a firm ground of childhood night terrors (here associated in particular with a closet at the top of the stairs) and twisted fairy-tale allusions; there’s also some pathos in the treatment of a broken but not unloving family struggling to keep it together.

Arthouse cinematographer Chris Doyle gives the 3D camerawork a painterly quality, perhaps most impressive in the spiral staircase motif that dominates the shock ending, and the austere production design of the traditional Japanese house where the family lives stresses the confinement and repression of this place of narrow corners, sliding screens, hidden recesses and frosted glass windows.