Sandra Bullock's 'Our Brand Is Crisis' role originally for a man

At the Toronto press conference for Our Brand Is Crisis, Oscar-winner Sandra Bullock discussed her pursuit and portrayal of a role that was originally written for a man. 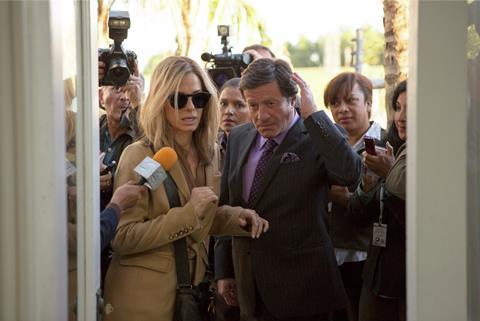 Bullock, who plays political strategist and master of spin Jane Bodine, said she had approached the writers and personally requested for the change in the character’s gender.

“What I’d like to comment on is the fact that I was able to say, ‘Would you be willing to take a role that was written and that you guys have cherished and worked on for a long time and developed a long time and change it to a female? And there was not a lot of hesitation,” Bullock said.

“We still have some ways to go but I don’t mind being the one to ask, ‘What have you got that you haven’t made yet that you’d be willing to change for me?’ the Gravity star said.

“Hopefully, I mean, what would be very helpful is if this film has a level of success that makes a studio go, ‘Okay, this is a viable thing for us, and we want to make more of this for women out there.’”

In Our Brand Is Crisis, Bullock’s character isn’t beholden to familial or romantic obligations or hang-ups, a refreshing departure from the fates many female characters are subjected to in films. One journalist in attendance at the press conference asked Bullock whether she thought that this had anything to do with the fact that the role was originally written for a man.

Bullock assuredly explained that if those tropes or types of storylines had made their way into the film, she would have had them removed.

“It had no place in that. It had no bearing on the story or the character. So I was real happy to avoid those subjects.”

Moderator Richard Crouse asked Bullock what drew her to the role that she plays in the film, and what propelled her to so doggedly pursue it.

“She was human. Flawed. We’re all flawed. None of us are perfect other than George and Grant,” Bullock said, referring to co-producers George Clooney and Grant Heslov.

“That’s in all of us. And those of us who don’t have it, have been through enough journeys in life and hardship to come out the other end and realize that’s not what life is about. I mean, I hope we all get there at some point. But I loved how complex and human she was.

“She was unlikeable, and she was struggling, and that to me is really interesting to watch because it’s in all of us.”

A lesson on our impressionability

Bullock explained that Our Brand Is Crisis is about how easily people are swayed and manipulated.

“I think it definitely represents where we are as a culture. I think we need to take ownership back and start looking at things for what they are rather than what we’re being sold.”

She said that it’s up to us to filter out truth from fiction and to educate ourselves, particularly now in an age when we have access to a wealth of information at our fingertips.

“You have to sift through and decide and research and do the work to find out what’s factual and what’s hearsay.”