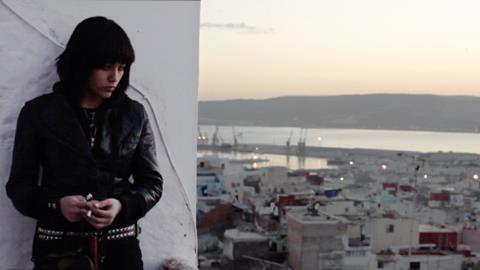 A slick and spiky drama that presents an alternate view of life for young people in Morocco, the impressively mounted Traitors, the debut film from American filmmaker Sean Gullette, is driven by a charismatic performance from newcomer Chaimae Ben Acha, who is a real talent to watch.

Traitors is an impressive film that belies its low budget as it breaks rules and creates an impressively off-kilter breakout project.

Mixing punk music and drug smuggling while also making great use of the Moroccan locations, the film may well provide familiar dramatic twists at heart, but it has a real energy that sets it aside from other local films. The film screened at Venice and at the Dubai International Film Festival, among other festival berths.

Gullette, who starred in Darren Aronofsky’s Pi, and also had a story credit, brings a fascinatingly off-kilter vision to the backdrop and succeeds in crafting a watchable art house film that has the qualities to appeal to festivals and distributors.

Ben Acha stars as Malika, a hoody-wearing punkette who is the lead singer in an all-girl band (the character was originated in Gullette’s 30-minute short of the same name, also played by Ben Acha) rather obsessed with Joe Strummer and the Clash.

She needs money urgently. Firstly to help her family, but mainly so that her band can rent a recording studio to produce a demo tape. After a half-hearted and rather inept attempt to con a tourist out of cash she falls in with a wealthy customer (Mourade Zeeguendi) at her father’s garage, who offers her a job.

She has to help drive a case laden with drugs through roadblocks and into the mountains, accompanied by the more experienced Amal (Soufia Issami), who she gradually comes to know and they develop a strong relationship of sorts. Together they come to a decision that will have a major impact on their lives and on the drugs deal.

There are a few familiar drug-smuggling clichés, but Ben Acha’s sheer charisma helps keep the story on track as this feisty, strident punk makes sure things work by her rules. Traitors is an impressive film that belies its low budget as it breaks rules and creates an impressively off-kilter breakout project.