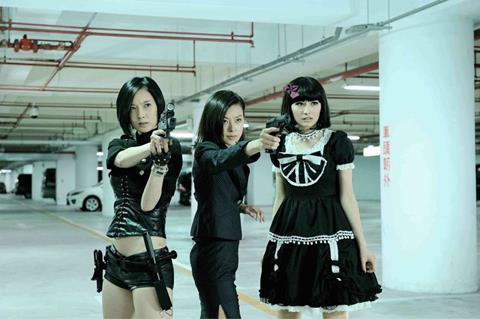 A children’s style sci-fi/fantasy adventure that blends cheerfully simple martial arts with a parallel-worlds conspiracy romp, all starring a trio of beautiful Japanese models-cum-actresses who favour tight fitting skimpy gear in their fight against fantastical evil, Travelers is a resolutely silly inter-galactic romp that may appeal to manga lovers…or simply those who a fond of actresses in skimpy gear.

Nao Nagasawa makes for a stylish and enthusiastic heroine, looks the part and handles the martial arts action sequences with a certain panache.

Set to be released in Japan in mid-April – using the shooting title of Travelers: Dimension Police (Toraberazu: Jigen keisatsu) – the film is directed by Koichi Sakamoto, who worked on the Power Rangers franchise and directed the 2011 series Kamen Rider Fourze. The special effects are rather so-so (and feel of the rushed through television variety), and the story rather crazy, but there is an, odd, sweet-minded energy to it. The film premiered at Filmart.

Apparently 10 years have passed since the discovery of inter-cosmic travel, and the existence of three parallel worlds have been confirmed. But the concern is what happens in one cosmos can influences events in the other worlds.

Along with her trusted android partner Bridge, she has been assigned to eliminate the inter-cosmic terrorist group DOUBT. But what is not known is who is behind DOUBT and what do they have planned?

During one jaunt she comes across her old partner Yui (Ayumi Kinoshita) – who as a clothing contrast sports a mini leather skirt over her micro-shorts – who she suspects may now be working with DOUBT. They are also joined by psychic Haruka (Yuko Takayama) – almost prim compared to the other two – and as they travel between a series of parallel worlds the secret behind the DOUBT is slowly revealed.

Nao Nagasawa makes for a stylish and enthusiastic heroine, looks the part and handles the martial arts action sequences with a certain panache. The story itself is less than inspiring, and the digital work ropey, but the exuberant innocence sat alongside the desperate need for sexuality is rather typical of the genre. The posters and images will look good, but the audience will be rather niche and the film unlikely to travel beyond forgiving genre festivals.