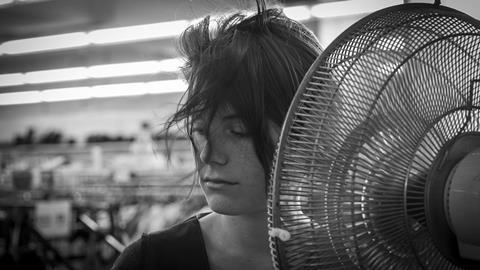 It’s summer in Quebec and none of the young, faintly cranky characters want to break a sweat in Tu dors Nicole, an offbeat series of quirky scenes propelled by slow burn humour, terrific sound design and pleasing bursts of creativity.  Musician Stephane Lafleur (who edited Canadian hit Monsieur Lazhar) makes excellent use of black and white imagery in his unconventional and slyly entertaining third feature.

Additional fest berths and arthouse exposure would seem to await this modest but assured venture following its world premiere in Cannes Directors Fortnight.

Twenty-two year old Nicole (Julianne Côté) thinks she’ll have the house to herself while her parents are away but her brother (Marc-André Grondin)) decides to use the premises as a rehearsal space for his band. Nicole gets fired from her job at a charity thrift shop for shoplifting - she’s stunned to learn that helping herself to donated clothes might be grounds for immediate dismisal.

Fortunately, her first credit card has just arrived in the mail. Suffice it to say that she and her best friend Veronique (Catherine St-Laurent), the lone employee of an elderly businessman, have a flawed understanding of how credit cards work.  They book a trip to Iceland whose cooler shores they may never reach due to a series of mostly avoidable misunderstandings that are bad news for the protagonists but good news for viewers.

Godefroy Reding is both perfectly cast and memorable as 10-year-old Martin whose “voice changed prematurely.” His attempts to put the moves on Nicole are a laugh-out-loud comic highlight as the titular heroine slowly bounces from minor obstacle to minor obstacle, creating new problems every step of the way.

The film benefits from a rich sense of summer as a state of mind. In fact, if lazy summers before adulthood kicks in vanished from the earth they could be reconstructed from the spot-on clues captured here.