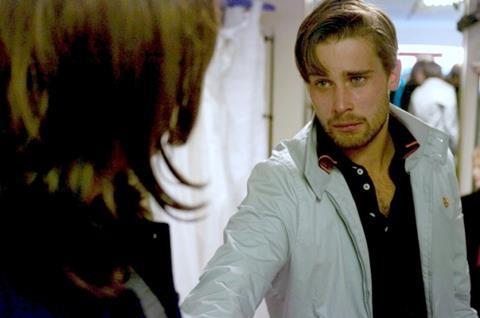 A darkly intriguing psycho-romance, low-budget British film Unconditional – which screened in Slamdance – is a smartly made tale of skewed obsessive love, driven by impressive performances by newcomers Harry McEntire and Madeleine Clark. Its brooding style and crisp cinematography mark director Bryn Higgins out as filmmaker to be watched, though it may be too inaccessible for international audiences.

Unconditional is an impressively made and darkly disturbing drama.

Set against a backdrop of bleak housing estates, city centres and seaside resorts in the North East of England, Unconditional manages to balance moments of grim humour with an unusual love-story that spins off into strange territory as dangerous and dark obsessions take over.

Sixteen year-old twins Owen (Harry McEntire) and Kristen (Madeleine Clark) struggle to make ends meet as they are full-time carers for their disabled mother (Melanie Hill). They make jokes about her dying, but also care about her deeply and their lives revolve around her.

Into their lives comes the seemingly cool Liam (Christian Cooke, who starred in Cemetery Junction), a suit-wearing salesman who visits them to handle a financial loan inquiry. With his flash blue car and easy patter, he appears a charismatic intervention into the twins’ dull lives and Kristen especially is taken by his spiv charms.

But is it Owen that Liam has his sights on. He takes him out for a drink and the pair bond over beer, pool and food, with Owen entranced by his charms. Thinks move into stranger territory when Liam convinces Owen to dress up as a woman and the pair go out for dinner together.

Liam begins to call Owen ‘Kristen’ and becomes more and more romantically obsessed with him when dressed as a woman, eventually resorting to frustrated violence when he feels Owen moving away from him. He insists on Owen dressing as a woman when they are together and starts to promise a future and a ‘normal’ life together. “Indecision is for losers,” he tells Owen. “There are no conditions on love.”

To a degree the story misses a trick by sidelining Kristen’s desire for Liam - the story begins with the twins each harbouring an interest in Liam, but veers mainly to the Liam/Owen story as it develops – which is a shame since she is an intriguing character as Owen. But the spiralling and complex relationship between Liam and Owen is bleakly watchable, especially as it reaches a climax as the pair check into the seaside Belgica Guest House (where veteran actor James Bolam plays the well-meaning owner in a brief cameo) and Liam’s behaviour tips over into frightening violence.

Unconditional is an impressively made and darkly disturbing drama, nicely scripted and impressively shot by Paul Otter. It offers up a delightfully skewed look at that dramatic cliché of obsessive love, with Christian Cooke and Harry McEntire intensely watchable as their strange romance develops.