‘Under The Open Sky’: Macao Review 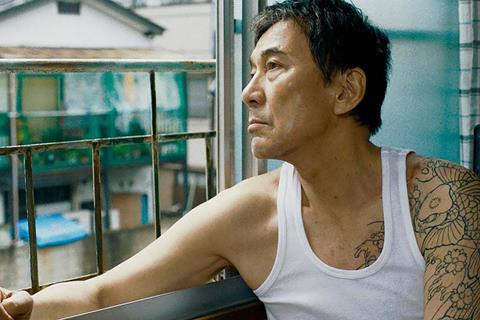 ‘Under The Open Sky’

After serving a 13-year sentence for murder, and more than half his life behind bars, middle-aged career criminal Mikami (Koji Yakusho) has finally decided to go straight, in this heartfelt, soft-centred drama from Miwa Nishikawa. But for a man accustomed to the status that his former incarnation as a Yakuza enforcer brought with it, the indignity of relying on state hand-outs is hard to swallow.

A big, abrasive turn from Koji Yakusho is likely to be the film’s key selling point

What initially seems to be a lifeline – a television company which takes an interest in his case and promises to help him find his mother – comes with its own set of expectations. But it does introduce him to sweet-natured Tsunoda (Taiga Nakano), the young TV director who forms a genuine connection with the rough-edged former gangster. And Tsunoda’s is not the only life which is touched by encounters with Mikami, as he attempts to reign in his propensity for violence and his savage temper, living out his life as an honest man. A big, abrasive turn from Koji Yakusho is likely to be the film’s key selling point. Combative, but bound by crime family codes and the ingrained rules of incarceration, he’s arresting as a man out of time and out of place. It’s possible, however, that the sentimental approach to the material might limit the picture’s appeal to festivals and the domestic audience.

Although gruff and unpolished, Mikami would seem to be a model prisoner, but for the fact that he shows no remorse for the crime that saw him locked up. “It was an unfair verdict. He attacked us with a sword,” he protests to the prison chief who is trying, one final time, to extract an admission that Mikami regrets his crime. The scars that carve through his Yakuza tattoo and lace across his shoulders back up Mikami’s story, and, in any case, his time is served. He bows respectfully to the guards, muttering “Screw you” under his breath.

But while his intention to go straight is laudable, it’s not that simple. Society is rather squeamish about men who spent their lives on the wrong side of the law. And Mikami is not a man who reacts well to pity or judgement, both of which are in plentiful supply. Then there’s the fact that old habits die hard and, as Tsunoda notes, the only time he seems fully alive is when he is beating up a pair of low-level hoods who are mugging an elderly man.

But despite Mikami’s criminal past, he finds that he is able to form connections with the people that he meets – an officious supermarket worker who accuses him of theft becomes a staunch advocate; a clerk at the benefits office offers support. And Tsunoda feels sufficiently moved by their friendship to start writing a book about Mikami.

It’s all very sweet and well-meaning, yet this story of redemption is a naïve and very pastel coloured portrait of a Yakuza veteran. Earnest piano tinkles on the score as Mikami warms the lives of those around him and takes steps towards a better life, or at least an honourable death. Mikami has explosively high blood pressure, a fact that he tends to forget while beating up muggers or playing football with adorable orphans at the children’s home where once lived, many years ago.