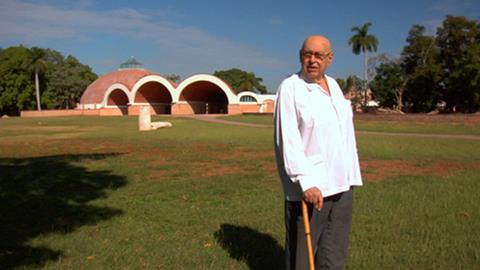 The idea began on a whim. In 1961 Fidel Castro and Che Guevara were playing a round of golf on a course that had been, before the 1959 Revolution, part of a fancy country club in the swank western Havana suburb of Cubanacan. Then and there they decided to commission a group of national art schools (at first called Escuelas Nacionales de Arte, but later became known as the Instituto Superior de Arte) to be built on that turf. Castro later said he wanted the complex to be the most beautiful art school in the world.

Vaults, arches, and domes predominate, with the tropical light and intentionally dark spaces alternating for a nearly disorienting effect.

Over the next fifty years a unique convoluted epic of contrasts - official support versus denunciation, construction versus work stoppage, usage and abandonment - enveloped the five resulting buildings, each dedicated to a particular art form. Now rediscovered, they are major markers in the history of alternative architecture and the political climate of Cuba in the second half of the twentieth century.

The international response will be, and to some extent already has been in some territories, positive, with festivals (at some of which it has already been well-received), TV exposure (Latino Public Broadcasting selected it for PBS in the US), and some theatrical guaranteed, especially in venues where powerful, unusual docs by the likes of Michael Moore have found an audience.

Nahmias and Murray, both Americans, communicate in great detail in this extraordinary, fast-moving, and engagingly dense documentary the saga of the structures and the individuals and social conditions that have been instrumental in their construction as well as their perception. They eschew voiceover in favour of meaty interviews, vivid cinematography (by Murray), including graceful inserts of the project at various stages, appropriate supporting archival footage, and Vulcano’s excellent non-stop soundtrack of salsa music, happy guitar, and melancholic violin. The combination is seductive.

The men were given carte blanche to hurriedly (in two months) design the schools: Here was an opportunity to fuse their shared revolutionary fervour with a concept of architecture that flew in the face of the modernism prevalent everywhere. Music and dance filled the construction site and office (also on the golf course), with enthusiastic student workers jazzed up by the optimistic political climate providing an ambience that certainly infected the outcome.

The material conditions restricting how the schools would be built (plastic arts, modern dance, dramatic arts, music, and ballet) were potentially limiting to the three “architects,” the Cuban Ricardo Porro (the first appointee, an intellectual and an eccentric who brings tons of charisma to the screen) and the Italians Roberto Gottardi and Vittorio Garatti, even if their backgrounds were more in the visual arts). The US-led embargo, which had begun in 1960, made steel for reinforcing bars and Portland cement exorbitantly expensive.

By default, the structures were created from available clay, in the form of brick and terra cotta. They poured concrete continuously into formwork for the mostly curved sections to prevent it from drying prematurely. Without steel for reinforcing bars, they revived the old Catalonian vault, functioned without them but still allowed a wide span.

The young team decided to make physical the ideology of the new Cuba: not closed systems as in the past but an open, non-hierarchical architecture, all interrelated and with multiple entrances harmonising with the contours of the golf course and, in some cases, tapping into indigenous traditions. They took on a magical realist quality.

Gone were the then-dominant strategies of linearity and rectilinearity: Vaults, arches, and domes predominate, with the tropical light and intentionally dark spaces alternating for a nearly disorienting effect—an intended one, like the meandering passageways. It might be difficult to imagine structures made primarily of brick to look airy and light, but by carefully selecting sizes, scale, and positioning they succeeded brilliantly.

The freedom of design the architects enjoyed did not last long. The 1961 Bay of Pigs and the Cuban Missile Crisis in 1962 contributed to a militarization of the populace, converting the sense of openness into more and more rigid dogma. Some powerful bureaucrats in the Ministry of Construction chastised the project as megalomaniacal, of little practical use, and unrelated to the newly empowered proletariat. Even Guevara came down on the art school. Construction officially ceased in 1965.

Once an isolated Cuba became dependent on the Soviet Union, all things Soviet, including sterile functionalist architecture, became the norm. Not only did the more anonymous prefabrication (a disaster in the Cuban climate) become the preferred type of construction, buildings had to LOOK prefab. The organic, tactile quality of the art schools became outré, disdained. They were hardly ever used.

Porro, relegated to designing objects in the ministry, moved to Paris; Garatti was deported on trumped-up charges; Gottardi alone remained remain, even though it meant unfulfilling jobs, because, as he explains on camera, he connects with the Cuban people. The fall of the USSR precipitated a desperate economic situation in the early ‘90s, called The Special Period, but soon afterward, Castro a few years later Castro had a change of heart and ordered for construction and restoration to resume. That lasted until 2009, when two devastating hurricanes and the implosion of the world economy triggered a final stoppage.

The American architect John Loomis visited the closely-guarded site with Gottardi in 1992 and wrote a seminal book, Revolution of Forms: Cuba’s Forgotten Art Schools, which came out in 1999. It generated great interest among preservationists - the World Monument Fund, where it was designated a “protective zone” in 1997, and it made UNESCO’s World Heritage Tentative List in 2003 - as well as aficionados of culture. Unfortunately, the economic embargo disallowed any of these organisations from providing funding for completion and a much needed makeover.

Besides this doc, nine years in the making, an opera is in the works, and several photo exhibitions have taken place, in Cuba and abroad. (Some artists utilised the unfinished spaces even when the buildings were in a state of decay.) The foliage that had engulfed some of the dilapidated buildings has been removed, and so has the undeserved stigma they and their creators suffered.