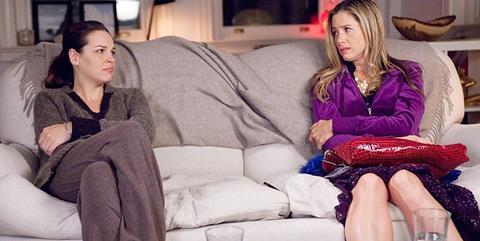 Two estranged sisters meet and beat out their differences for 80 minutes before they come to terms with themselves and with each other in Nancy Savoca’s high-strung chamber drama, her first feature film since Dirt (2003) which travelled extensively on the festival circuit.

It is LuPone, as the girls’ mother, seen for barely five minutes at the end, who generates more of a personality and interest than both of her daughters.

Savoca claims Roberto Rossellini’s The Human Voice (an adaptation of a one-woman play by Jean Cocteau) and John Cassavettes’ Woman Under the Influence inspired her and indeed, their traces are easy to detect in her film. But both her models featured superb actresses - Anna Magnani for the first, Gena Rowlands in the second - among the greatest the screen has ever known and deprived of such talent, Savoca may be asking too much of her cast and putting too little on their plates to work with.

Carrying most of the burden on her shoulders, Lucy (Sorvino) first enters the screen, waving her mobile phone, which will play an important part through the film, as she frantically tries to contact a man with whom she obviously has an affair, only to be unceremoniously dumped.

Despondent and irate, she lands in the prim, spare, antiseptic flat of her sister, Jenny (Blanchard) whom she hasn’t seen for three years after an irreparable rift which should have separated them forever. Jenny is less than happy at her sight and desperate for her go, but Lucy couldn’t care less. Oblivious to the distaste and animosity of her sister, she installs herself comfortably on the sofa and does not intend to budge from that spot.

Within five minutes, she announces her intention to stay for a day or two or more; she invites a friend over to visit; balks at all the rules of the house (fully organic, no smoking, no alcohol); she is loud, hysterical, vulgar - “a fucking tornado” to quote the script - but underneath it all she feeling a deep pain that pushes her at one point to the brink of suicide.

Jenny, stiffly struggling to keep under control despite the unexpected and profoundly disturbing intrusion, has evidently cut herself off her family some time ago and created a completely new identity for herself, to which she is determined to stick despite her sister’s efforts to drag her down and out again.

She lives with a nice, sympathetic health nut (Mike Doyle) whom she intends to marry soon - peace and quiet are just around the corner and she will allow nothing to prevent it. It is only midway through the film the real reason for Lucy’s visit is finally revealed – their mother had died. By end of the film, watching a home movie memorial of the late Lucia (Patti LuPone), who, we are supposed to understand is at the roots of both sisters’ problems, some kind of truce is finally established.

The limited space of a one room apartment is used to advantage by Savoca, forcing her characters into constant collision and the resulting tension is inevitable. But the script explores neither Lucy nor Jenny sufficiently to penetrate beyond the facade. In both cases it looks more like well-rehearsed acts rather than the real thing.

Sorvino starts by hitting the high notes of her character’s introduction, but there is no way for her to go any higher. Blanchard’s repressed performance makes better sense but again, it does not sufficiently grow or develop. Strangely enough, it is LuPone, as the girls’ mother, seen for barely five minutes at the end, who generates more of a personality and interest than both of her daughters.