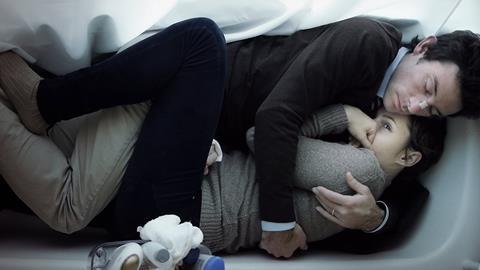 In this follow-up to his mind-bending 2004 Sundance winner Primer, writer-director-actor-composer Shane Carruth delivers a far more ambitious and magisterial cinematic achievement. But as visionary and beautiful as it may be, Upstream Color wears its pretensions a little too proudly. After more than 90 scintillating minutes—of atmospheric sound recordings, super-powered worms, pent up pigs and schizoid breakdowns—audiences will be hard pressed to figure out what this biological-sci-fi odyssey is all about. And even if they do, is it enough?

With a bold fragmentary editing style, an elegiac symphonic score and stunning cinematography—marked by overexposed white light that recalls the work of Stanley Kubrick—the film convulsively propels along at a rapid pace,

One has to give Carruth a large dose of credit for sticking to his creative and cerebral guns, making a daring movie about life cycles, and planning a US release all by himself. But while the movie’s sheer ambition should warrant a certain amount of critical support and international attention, Upstream Color is not made with commercial concerns in mind.

From its opening prologue, Upstream Color is as vivid as it is opaque: A man digs up wriggling worms from the dirt and then some teenage boys consume the creatures and develop some kind of special powers. As the story proper kicks in, the same man kidnaps a professional woman named Kris (Amy Seitmatz), forces the same kind of worm down her throat, and then manages to exert complete control over her mind, turning her into a malleable drone. After further tests, culminating with a medical experiment involving a pig, Kris wakes up one morning by the side of the highway in her car, freaked out and totally unaware of why she has scars on her legs and where she’s been.

In the second act, Kris is a shell of her former self - a skittish woman who can barely hold a job. One day, she meets Jeff (Carruth), an individual who is also struggling to come up from rock bottom, and the two eventually, tentatively, become lovers. The rest of the film involves the ravaged couple trying to make sense of their erratic and obsessive-compulsive behavior, understand the strange sounds in their brains, and locate the benign-seeming scientist with the pig-farm who is still inadvertently controlling their lives.

With a bold fragmentary editing style, an elegiac symphonic score and stunning cinematography—marked by overexposed white light that recalls the work of Stanley Kubrick—the film convulsively propels along at a rapid pace, barely stopping for the audience to catch up to Carruth’s master plan. Many of the scenes pulse with the energy of a thriller: There’s a brilliantly conceived cross-cut sequence when Kris and Jeff, independently of each other, both go into a kind-of emergency combat mode, search for each other in a panic, head into their home, scramble for supplies, and then retreat into their bathtub for an impending apocalypse.

One shouldn’t criticise the film for being too cool or intellectual, or that the love between Kris and Jeff never feels real. This missed the point. The relationship between Kris and Jeff shouldn’t be judged by standard romantic-comedy conventions, as the filmmaker subtly suggests early on their connection is driven more by chemical or cosmic forces, not emotional ones. For that reason, Carruth can get away with casting himself as the more phlegmatic Jeff. Seimetz gets to do more, effectively portraying Kris as a damaged soul; she walks like a wary kitty-cat, hunched and cautious, rarely opening up her face to a smile.

Surprisingly, however, Upstream Color ends on a moment - perhaps its only moment - of profound warmth, in an embrace between the human and natural worlds. Never has the smile of a baby pig looked so innocent and inviting; it’s almost enough to forgive the film’s overreaching.