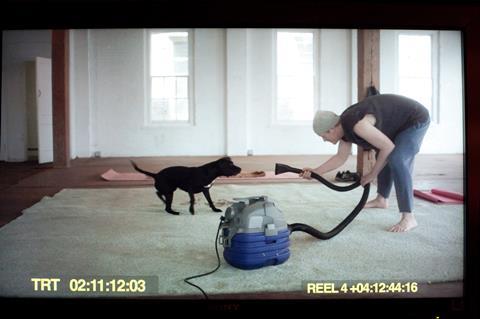 A test of endurance that even hardcore arthouse crowds might find hard to crack, Zbigniew Bzymek’s debut feature bears all the earmarks of an experimental theatre video artist who is less than concerned with narrative clarity or plot structure, preferring to produce flows of images that generate instinctive rather that intellectual emotions.

Bzymek uses associations from the past and metaphoric images to probe the psychological and sexual aspects of the relations between his three characters.

Following three characters that live on the edge and hopelessly strive to reach some kind of common harmony, the story, as convoluted as it is, remains the image of a failure foretold. But then, according to Bzymek himself, this is just as it should be, since he willingly concedes that in his eyes failure is far more interesting than success. Best chances for his effort are naturally audiences who are already familiar with Bzymek’s name and will find it easier to cope with his visual language.

Roger (Jim Fletcher, a star of the experimental stage) is a tentative and not very successful yoga instructor who collects his disillusioned daughter, Zoe (Courtney Webster), who is back home from military service. On the way she tells him that she intends to pick up her relationship with her former girlfriend Maya (Lauren Hind), officially diagnosed as a schizophrenic. That’s about as far as the script is willing to commit to linear development. From this point on, every ensuing stage is accompanied by a myriad of flashbacks which are supposed to expand the viewer’s understanding of the three protagonists, but instead, lead more than once to utter confusion.

Roger, though he warns his daughter that Maya can never be entirely hers because of her affliction, nevertheless tries to find a way for the three of them to live together. When an old friend, When Morris (Arthur French) suggests they renovate his middleclass flat, they jump at the chance and move into the place, but the constant tensions arising between them effect not only their work in the flat but Roger’s classes as well. A black pit bull he finds on the street and adopts for his own, puts an end to the classes altogether and by the end of the picture he is left alone, watching the world upside down, until one student surprisingly shows up, offering an eventual glimpse of hope after all.

Bzymek, born and educated in Poland but based for many years in New York, uses associations from the past and metaphoric images to probe the psychological and sexual aspects of the relations between his three characters, but never comes up with distinct conclusions, leaving practically everything wrapped in an obscure veil which allows his audience a vast margin of speculations. Polish cameraman Robert Mleczko, editor Kevin Palmer and the grating score of guitarist Harvey Valdes seem to have captured Bzymek’s spirit and intentions, and so do Webster and Hind, who not only play lead parts but are also credited as producers.