Paolo Sorrentino: directing TV series 'The Young Pope' was “inspiring” (but film is next) 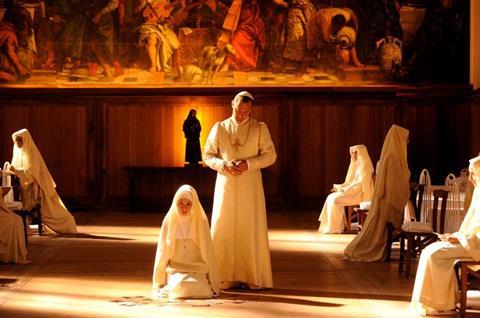 The Italian director, known for cinematic feasts including Oscar-winner The Great Beauty and Il Divo, will this weekend unveil the first two episodes of the anticipated, big-budget HBO-Sky-Canal Plus series on the Lido, where Venice head Alberto Barbera has reserved it the prestigious first Saturday night slot.

Jude Law stars in The Young Pope as the newly elected and unconventional Pope Pius XIII (aka Lenny Belardo), a young man struggling under the weight of his new responsibilities and the history of becoming the first American pontiff.

While the series’ irreverent tone might have concerned less formidable directors, Sorrentino was unphased by tackling a global icon such as The Pope:

“I’ve always lived this work with a healthy and necessary unconsciousness,” the filmmaker told Screen.

“I think that unconsciousness is a necessary resource to create something good. This attitude has enabled me not to feel anxiety or pressure when I faced real life characters or complicated ones as in the case of a Pope. You have to love your characters to make them alive. And love does not include anxiety or pressure.”

Pressure came from form rather than content. The elongated arc of a series threw up new challenges for the director:

“The main challenge was to govern the whole thing. Managing the concentration, remembering the scenes, the narrative articulations and coherence, and the emotional states of the characters. I directed all the episodes, [across] seven months of shooting and keeping everything together has required a considerable effort.”

If there remained any lingering doubt that auteur movie directors are falling for TV, Sorrentino is further antidote. While the medium inevitably poses a dilemma for some in the independent film industry, Sorrentino views the small screen as an “opportunity” for his peers:

“I do not think it creates a dilemma, but instead an opportunity. For years we have had only one option: the cinema. Now we have another: television that, thanks to the foresight of producers, allows us to operate in the right conditions: creative freedom and an important budget.”

While revered US directors have been making the switch to TV for some time - Woody Allen being the latest (Australian Baz Luhrmann is another high-profile recent convert) - Sorrentino is one of a small but growing lineup of European art-house heavyweights to join the fray.

However, while many festivals have embraced TV strands and premieres, one festival – the biggest - remains defiant. Cannes.

And that’s how it should be, argues Sorrentino, himself a Croisette regular (The Young Pope is Sorrentino’s first major work not to open at Cannes since his 2001 debut One Man Up, which premiered at Venice).

“Cannes is a sanctuary of cinema. And in sanctuaries things should not be changed, otherwise they stop being such.”

The director admits he is likely to return to the small screen in the future. But not before a rendezvous with cinema:

“I do not rule out at all doing TV in the future, it was inspiring, but now I feel a certain nostalgia for the power of cinema.”

Nostalgia is of course one of Sorrentino’s great calling cards. Movie devotees stand-by.