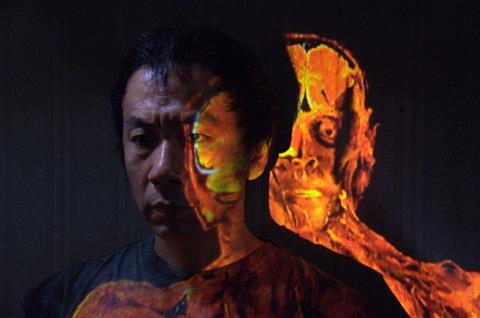 Bullet Man’s plot judders along like an underdeveloped cyberpunk manga, taking in android mothers and evil experiments on human guinea-pigs

Worldwide cult Asian markets look to be the most obvious outlet for this minor addition to Tsukamoto’s filmography. And its Japanese prospects are unlikely to be much more buoyant; of the indie actor-director’s recent movies, only the more commercial Nightmare Detective and its sequel registered more than mild interest at home.

Bullet Man’s story centres on Anthony (Bossick), an American executive in a nameless company who lives in a concrete minimalist Tokyo apartment with his agoraphobic wife Yuiko (Monou) and their little boy Tom.  Walking back one day from one of the weekly check-ups which his health- obssessed doctor father insists upon, Anthony sees his son run over and killed by a crazed driver. He is at first paralysed by indecision as Yuiko urges him to find their son’s murderer and take revenge, but gradually works himself up into a rage – in the course of which he begins to turn into a clanking metal killing machine firing bullets and oozing bodily fluids.

Bullet Man’s plot judders along like an underdeveloped cyberpunk manga, taking in android mothers and evil experiments on human guinea-pigs. Tsukamoto himself plays Anthony’s chief antagonist, a man who wants to kill him for reasons that are not easy to fathom – this is a film where the clunky English dialogue is sometimes cringingly on the nose (“It’s been twenty years since mom died – and you still haven’t healed”) but where whole swathes of background are sketched in so casually that we struggle to make sense of the story. It doesn’t help, either, that Anthony is an entirely cold and unsympathetic hero.

Tsukamoto’s fanbase would argue that the Tetsuo films are not really about coherent stories. But even the pneumatic-drill visual and aural assault on the audience that is Tsukamoto’s main calling card feels a little tired this time round – all those rapid-fire, story-halting montages of cogs, skyscrapers, metal and unspooled filmreel seem very late-eighties now. The high-contrast photography, with its colours desaturated almost to black and white, still looks good, and the crux of the matter – Anthony’s transformation into Tetsuo the Bullet Man – will do the trick for body horror fans.

What is most disappointing about the third film in Tsukamoto’s mini-franchise, however,  is the way it seems to more interested in simply displaying another version of the man-machine morph rather than taking the themes of human-machine marriages to a higher level. It’s Transfomers for the arthouse brigade – only not as well scripted.