Martin Scorsese’s long-time editor talked Raging Bull, the move to digital and the art of cutting while at the Venice Film Festival where she has picked up a lifetime honour. 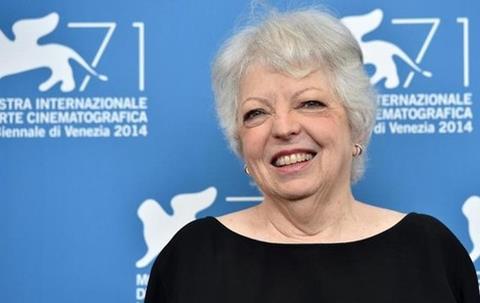 Thelma Schoonmaker, the acclaimed long-time editor for Martin Scorsese, has now added another recognition to her long list of wins and nominations — she was awarded Tuesday with the Golden Lion for Lifetime Achievement at the 71st Venice Film Festival.

Schoonmaker said at yesterday’s press conference that she thinks editing can still be a misunderstood art — she noted it is much easier to understand lighting, camerawork, acting, set design and costumes than editing. Still, she does not like to think of it as an invisible art because “we like to slap the audience in the face sometimes with a cut that really is not invisible”.

Schoonmaker said she has noticed recently that editing has gained more recognition “because people are beginning to understand how important it is to filmmaking,” perhaps because they are dabbling in editing at home and they understand how hard it is.

“It’s very hard to describe it,” she says of learning the craft. “You would have to sit in the room with us and you would be very bored but it’s mysterious because it’s very creative and I think it’s the best job in the world.”

It was while on a six-week course at NYU that she was introduced to Scorsese. “Someone had cut his negative incorrectly and [I] was the only person who knew how to maybe fix that,” she recalled of the start of their 50-year working relationship. “I had no idea I would become a film editor. He taught me everything I know and once I was introduced to it, I became addicted, of course, like most filmmakers,” she added.

Schoonmaker had started by working on documentaries including Woodstock. That non-fiction background was crucial to later working with the improvisation in Scorsese’s films. She said: “When you’re a documentary film editor, you’re given a whole bunch of material and you have to sort through it and try to find a line, a plot, a structure and pull out people’s characters. That is what you do in improvisation. Some editors might be impatient with improvisation.”

She was glad to see more improv “come back in The Wolf of Wall Street. We haven’t worked in improvisation in a long time but Raging Bull was one of the hardest things I’ve ever had to do, try and take the brilliant improvisation of De Niro and Joe Pesci and make it work,” she said.

For her Venice ceremony, Schoonmaker picked a clip from Raging Bull because “it was one of the most amazing things I have ever worked on”. She went on to describe the editing process of the final fight scene of the film: “Scorsese had incredible designs for the fights in Raging Bull. He knew there were going to be a lot of them and he wanted to make each one of them very different so he came up with beautiful camera moves and editing ideas and when we came to the final terrible defeat of De Niro by his great rival Sugar Ray Robinson, he had an enormous storyboard of an incredible number of shots and when we started we went by that storyboard but interestingly what happened is that the image of his wife Vicky played by Catherine Moriarty reacting to the beating by putting her head in her hands then lifting it up later and putting it down again because she can’t stand what she’s seeing became the linchpin on which we hung the entire scene. So we violated his original storyboard structure and instead went with the powerful emotion of her reacting to what she was seeing.”

If he didn’t have another feature film starting right away, they would spend a lot of time making films about the history of cinema.

When asked about her working relationship with Scorsese, she answered that everybody had always wanted to know who had the upper hand but according to her, it is not that simple “we collaborate so beautifully together because we have worked together for so long, we’re like one mind. I know what he expects from his footage but he’s very good about any time that something is not working. He’s wonderful about considering another way to go.”

She went on to explain their working dynamic as well — “with digital editing I now can make many, many versions of a scene. So, when he comes in, I always show him the edit the way I think he would have wanted it. He deserves that. He’s been thinking and dreaming of the film for much longer than I have worked on it. And then, if I feel it needs a different approach, I show three or four different versions of the scene and he will always be open to a better idea … But I wait. I let him see the film first the way he intended it. I don’t want to push him. There’s no reason to … Then, we start to rework it together and it’s a constant conversation all day long. We make a thousand decisions a day and we talk about art, life, Marco Polo, movies, everything, the Pope… And it’s the most fantastic world to be in… We always have on the right side of the room TCM and we have it silent and we would look at it occasionally to get inspired. It’s also the best film education course in the world to be working with him.”

As far as the digital revolution is concerned, she sees positives and negatives.

Schoonmaker said she can access the film very quickly, “I can access another take in a second. I can also make copies of my edit and then not worry about sync or where the music is because I have that in one edit and I can just explore, feel free to experiment constantly. I would say that that’s the most important thing. We can make dissolves now, we can freeze frames, we can alter the speed of the shot, and all that we weren’t able to do on film. We can have 40 tracks if we want and I used to run two but we made great movies with just two tracks” adding that she and Scorsese missed the flatbed to which he was used to. “Hopefully, we’ll still be able to shoot a little bit more on film. Kodak has agreed now to make film for another three years but labs are closing all over the place. It’s very sad.”