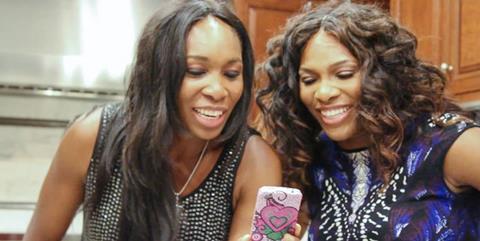 An enthralling and often insightful documentary about two supreme sibling athletes, tennis film Venus And Serena is a must for tennis fans, and easy programming for doc fests and as well as theatrical and/or television scheduling whenever a major tennis tournament comes around.

The film is at its best is when it goes behind-the-scenes with the sisters as they try and overcome injury, strain in the gym and on the training court or simply hang with their friends and support staff.

It offers some fascinating behind-the-scenes material of Venus and Serena Williams as they go through the 2011 tennis season interwoven with interviews and archival material, and while there are times you wish director-producers Maiken Baird and Michelle Major had been able to dig a little deeper, in truth the Williams sisters do open up a great deal.

The Williams sisters dominance of women’s’ tennis and their rather unique tennis beginnings (trained as children by their father on public courts in Compton, California) are well documented, but the film nimbly links together their complex family life, religion, profile, fashion and various injuries and recovery regimes to offer-up a fascinating profile of two dedicated athletes.

The year 2011 was a difficult one for the sisters. Serena battled to recover from a pulmonary embolism and Venus’ struggled with a debilitating autoimmune deficiency, but their determination to recover their fitness at least offers Baird and Major the opportunity to be with them as they struggle, strain, doubt and debate…rather than simply win matches. And while the film never quite manages to get them to fully open up, as they fight to deal with physical issues they are far more exposed than they might be.

There have been reports that the sisters have mellowed in their support for the film because of the way it presents their father and longtime coach Richard Williams. He is certainly a driven, forthright and prickly figure, deciding on their future when very young and controlling in terms of discipline and access to the young players.

The film, though, also gives equal space to their mother Oracene Price who seems to have been equally influential, tending to their emotional needs and helping define them as strong and confident young women. In one fascinating scene she is asked what advice she would give her ex-husband’s new wife. “Run,” she simply replies. This – and other moments only hinted at during the film, such as Richard arriving at training with a son neither Venus nor Serena knew he had – points to a complex family upbringing.

Among the interviewees are Bill Clinton, Gay Talese, Anna Wintour, Arnon Milchan and Chris Rock, though it is John McEnroe who offers more insight into the sisters as driven athletes, rather than fashion or cultural icons) Where the film, though, is at its best is when it goes behind-the-scenes with the sisters as they try and overcome injury, strain in the gym and on the training court or simply hang with their friends and support staff, trying to be ordinary young women thrust into an extraordinary world. They both love karaoke by the way.

Towards the end the film touches on the contradiction that they were raised to believe in the submissive wife role that’s expected of them according to their Jehovah’s Witness beliefs, but the subject is swiftly changed as the film heads back onto the court. To bring Venus And Serena up to date the film wraps with footage of Serena winning at Wimbledon in 2012 and detailing the fact that she also won Gold at the London Olympics, with the sisters going on to win Gold medals in the doubles later that same day.