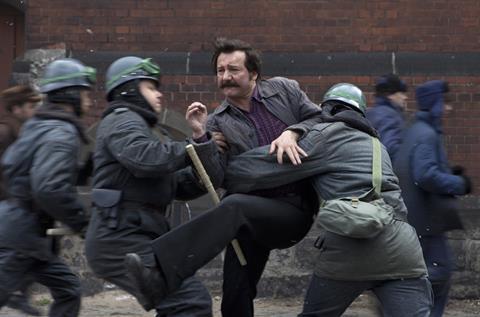 At the respectable age of 87 but still terribly concerned with the need to put his country’s history in correct perspectives, Poland’s leading filmmaker Andrzej  Wajda has taken upon himself the responsibility to paint the portrait of his homeland’s  latest national hero, Lech Walesa, in its fully deserved dimensions. Walesa, if there is someone who doesn’t recognise the name, was the leader of the Solidarity Party, responsible for restoring democracy in Poland.

Robert Wieckiewicz plays Walesa with gusto and anyone interested in a comparison with the real thing can see Walesa himself in the last shot.

Unsurprisingly admiring and didactic to a fault, Wajda’s account of Walesa’s life consists of a fictional part, real events re-enacted and often shot in grainy, bleary colour - or even black and white - to look authentic, and lots of archive footage, the two styles blending effectively together for an inspiring national saga that is bound to get enthusiastic response at home, polite interest abroad and plenty of festival exposure, like every other Wajda film until now.

The veteran director claims he went back behind the camera because he feared the task will fall into the wrong hands. Working from a script by Janusz Glowacki, he used Walesa’s momentous interview with the late star Italian journalist Oriana Fallaci (Omaggio) as his point of departure to enter the man’s story from his own point of view.

He shows Walesa (Wieckiewicz) as cocky, self-confident, resourceful and determined, uneducated but instinctively smart…a born leader who has crowds eating out of his hand and a family man who loved his wife, Danuta (Grochowska) and his six children but never hesitated to leave them in order to fulfill his duty, which he obviously also enjoyed due to the power and authority that came his way.

Suspicious of all intellectuals (and of peasants as well, a parentheses that is never explored beyond a brief mention), he was a shrewd judge of human nature and had no illusions about it, always remembering to leave his watch and wedding ring every time he was arrested, for his wife to sell in case he didn’t return.

Poland is the background, a difficult country to rule under any terms, more so under the communist regime, where nothing worked, poverty ruled, the fierce hand of the secret police penetrated into every corner, setting the poor against the poorer, and every attempt to demand more justice, equality or better conditions of life was pitilessly squelched.

Just like Walesa’s career, the picture starts with the 1970 strike at the Gdansk shipyards, and the ruthless police repression it incurred, shown in full, bloody detail and featuring the one moment of weakness the script allows its hero. Arrested under false pretenses, he agrees to sign up and become an informer for the police, being threatened that otherwise that otherwise, they would take it out on his wife and on their new baby.

Going on to cover all the following steps in Walesa’s career, his struggles, setbacks and victories which finally led to the recognition of Solidarity as an official party and his being awarded a Nobel Prize for his pains (his wife had to pick it up, for fear that if he crossed the border, he won’t be let back into the country), Wajda’s film reads like an official lesson of recent Polish history, spiced with gentle incursions into the life of its hero. Wajda may be an octogenarian, but he has lost none of the nervous energy of his past, he drives the story imperiously forward, equally proficient in mass scenes and intimate moments, deploying full rhetorical force to express the appreciation he has for his hero.

As suggested by the title, this should be considered the third part of a trilogy describing Poland in the process of shaking its chains away, started in 1977 with Man Of Marble (a clip from that film is sneaked in here) and the subsequent Man Of Iron (1981), which actually dealt with the uprising in the Gdansk shipyards. Robert Wieckiewicz plays Walesa with gusto and anyone interested in a comparison with the real thing can see Walesa himself in the last shot, speaking to the American Congress. Agneszka Grochowska offers a spirited, sympathetic Danuta, while Maria-Rosaria Omaggio is as mannered and over the top as Krystina Janda used to be in Man of Marble. Evidently, that is how Wajda envisions female journalists.